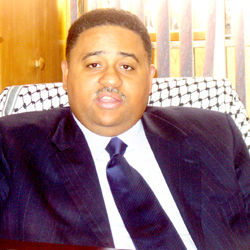 He spoke to Joseph Omoremi, editor of The Chicago Inquirer on a number of issues including why he opted out of the Black ministers’  conference.

Dr. Bullock: Good afternoon, Joseph. I’m glad to have this opportunity to talk with you and I’m excited about the future of your paper and publication. I know it’s going to be a huge success because our community needs to have different voices, different outlets, and various avenues to discuss and talk about issues that affect Africans and African Americans not only domestically but also globally.  So your paper is important from that vantage point.

Inquirer: Election is coming later this year. You had the largest votes among contestants in the Republican Party during the last election but we are not hearing your name in any of the positions available even in your precinct?

Dr. Bullock: The reason I’m not running for any position this time around is because there are viable candidates who would represent the party now. The time is just not right today and I think there will be opportunities we will consider in the future. Our party has a lot of work to do as it relates to outreach to minorities. I’ve not seen the efforts yet despite the fact that we have a lot of outreach apparatus in the party to substantially reach out to African Americans and minorities to recruit them into the party  of Lincoln. Until that apparatus is in place Joseph, I think it would not be to my benefit right now, until that infrastructure is in place from the party perspectives, and resources in place to seek the African American vote.

Inquirer: In the last election, you attracted so many Blacks to the party and with your current posture, how are you going to keep them in the party?

Dr. Bullock: I want to keep the momentum in terms of building a future partnership with the African votes by talking about economic development and business prosperity and educational issues and health concerns. Those are the bread and butter issues Africans care about in the Chicago area. Nigerians, Liberians, Ghanaians and others and those from the Caribbean as well. They are concerned about their future. In order to secure a viable future, one must have economic engine.  Secondly, we need to involve Africans in the process, especially their intellectual capacity and financial well-being. Their ability  to organize a very growing group could be a major advantage to the political process, especially the Republic party.

Inquirer: Recently, the mayor of East Cleveland called on Africans and African Americans to work together, not minding what happened in the past. What do you think about that call?

Dr. Bullock: I agree with him because we are inextricably linked culturally, spiritually and geographically. And the next step is to be linked politically and to pull our resources around a common agenda of economic development, war on illiteracy and addressing the HIV/AIDS crises and the whole notion of empowering our children to better themselves in the education arena. I think Africans and African Americans need to come together to form a viable force as a political voting block And with the resources and the intellect Africans and African Americans have done in the past, now is the time to make new history to bring those two groups together.

Inquirer: How far is it true that you are starting an HIV/AIDS foundation?

Dr. Bullock: I think my interest as a minister goes beyond the church, although the church is the anchor of our institution. I have an interest to go beyond the four walls of the church and begin to address some of the social ills that affect our people and community.

The HIV/AIDS situation is the number one crises in the world right now. In Russia, on the continent, in the Caribbean and China. You see all these  data and statistics that say that the rate and percentage of those affected by HIV/AIDS are going up. It is an issue I will like to work upon in the nearest future. It is the number one thing in economic development, job creation and business development.

Inquirer: Why are you in the Republican Party because you talk more or less like a democrat?

Dr. Bullock: I’m in the party because we need credible voices in both isles. Secondly, there are historical precedents of African Americans and Blacks in the party going back to the time of the civil wars and so forth in that era. Frederick Douglas, Washington and a lot of our heroes were republicans. They were in the party because they are pro-business, pro-family and Democrats want to tax and tax and the country needs less taxes and more income.

Also our people need options and the Democratic Party gives us limited options. A lot of Blacks agreed with the Republican message. There are some good Republicans and bad republicans just as we have good Democrats and bad democrats. But as a republican, I support affirmative action.

Inquirer: Does that make you a good Republican?

Dr. Bullock: Yes, because it gives us a hands-up instead of a handouts. It levels the playing field because of the fact that we were enslaved and were not given the same opportunities like our European brothers and sisters.  Affirmative action opens the door and gives us the opportunity to compete for jobs and upper mobility in the business world and education.

Inquirer: What is going on with the Family Technology Center established during your reign as the president of the National Association for the Advancement of Colored People (NAACP), South Side branch?

Dr. Bullock: I don’t know what is going on with the center. You have to talk to the NAACP.

Inquirer: The late Mayor Harold Washington was a trailblazer by all standards. Since he died the fortunes of African Americans suffered a devastating blow. Any possibility of having a credible candidate to run for the mayor again and bring the community together?

Dr. Bullock: There is always a possibility. The issue is do we have the will? And the willingness to organize and to financially back one right candidate? Or can they let us organize around one candidate? There are lot of clowns out there. If the community has the will to organize and support a candidate, I think it will be a done deal.

Inquirer: The beliefs in the African community is that the Black ministers conference are allegedly sabotaging the political process and the emergence of credible Black candidate to protect the pecks flowing to them from current administrations?

Dr. Bullock: Well, unfortunately some of those in the ministry have succumbed to the temptation of the political process. The perception in our community is that some of the clergy have been bought off by City Hall. I can’t say if this is true or false but the perception is there. What I can say is that Black clergies should always maintain the position of independence in order to speak to the power without compromising the gospel and the integrity of the congregation that we lead. Black clergies have always been in the forefront of political empowerment in the country. I think in the future if there is going to be political power at the grassroots, the clergy has to maintain independence without interference or compromise of the gospel.

The ministers must also encourage young people in their congregation to participate in the political process through voter education and voter participation.

Inquirer:  It is easier said than done. Many of these ministers are engrossed with pecks that they will do anything to counter oppositions?

Dr. Bullock: It is a personal decision. I’m not a member of the ministers conference.

Dr. Bullock: Well, I’ve  been so busy and been trying to do things here in the church and my involvement in last election and NAACP. However, I know a lot of clergies in the conference. They’ve done some good things but I have to take a decision, Joseph, as to my priority. You can’t just be everywhere.

Inquirer: But the ministry should be your first love?

Dr. Bullock: Yes, but when you have a progressive agenda, sometimes there is not compatibility. We could do a lot to remove the perception of been bought off if we have a voice of independence in organizing and rallying in terms of what is in the best interest of our community. Not only in our communities because we separate too much.  Chicago is no longer a melting pot, it is a mosaic. We need to be part of the mosaic movement. Dr. King was an independent voice and many others like Fredrick Douglas who stood on what they believe in  and they were often unpopular in their community. Dr. King could not preach in Chicago in too many Black pulpits.  He was not welcomed by a lot of Black pastors to preach in the city because of their loyalty to the first Mayor Daley. So there was a conflict of interest, yet we celebrate his birthday nationally now. We pastors ought to be unapologetic when we talk about Black interest and our communities.  Charity begins at home. If we don’t take care of ourselves, who will? And if not now, when? We need to revitalize the pro-Black interest across the board, politically, economically, culturally and above all spiritually. And when those four come together,  there will be a pivotal shift in our community for the better because once you put pro-Black interest first, you put your children first. You putting your neighorhood first and you are putting your family first  and our seniors first.  You are putting your money first. I meet Black businesses all the time and they say our people are not supporting us.

Dr. Bullock: We should be more committed in the new year towards addressing the social ills that adversly affect our community, specifically as illiteracy, poverty, disease and affordable housing. And those who should lead the charge should come from Black pulpit in Chicago.

Also, we should strategically partner with other communities after we help ourselves specifically Africans.The African American community in Chicago and Africans  in Chicago should build a strategic alliance and come together to address economic development.

Genesis of mistrust between African immigrants and African Americans

“Our frustrations with elected officials”-Dr. Ewa I. Ewa