Gov. Tinubu, Oba of Lagos, others celebrate with Olowopopo at 60 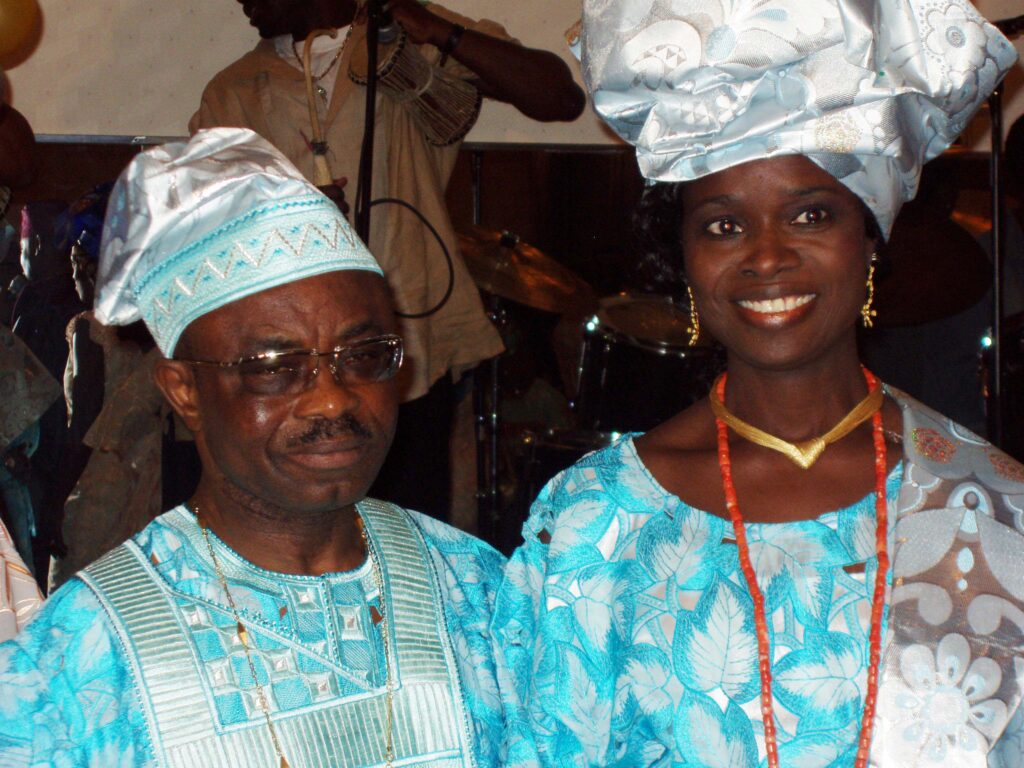 The world stood still at the Harambee Hall, Chicago when the recently crowned Lagos monarch Oba Rilwan Akiolu was ushered into the main hall, venue of the 60th birthday party of Dr. Nurudeen Olowopopo.

Long before the arrival of the king and Gov. Bola Ahmed Tinubu of Lagos State, the main entrance to the hall was jammed by gatecrashers who were politely turned back by security men and police officers while invited guests with valid invitation cards streamed in continuously.

Nigerians, nay Africans, decked in their glittering babanriga, Senegalese and other native attires and costumes were a delight to watch. Gingered by talking drums, Fuji music maestro Alhaji Wasiu Ayinde entertained the celebrant and invited guests who danced to fuji tunes.

Nigerian chief Imam in Chicago had initially set the ball rolling with prayers at the gracious event. Mayor Richard Daley, through his representatives boosted the joyous mood of the celebrant when he declared September 19th Dr. Olowopopo day in the Windy City.

“We will give you the necessary paper for it at a later day,” he said and praised the celebrant for his selfless service to the city, Nigerians and Africans through the city’s African Relations Commission. Congressman Danny K. Davis described Olowopopo as the true son of Africa.

“A man of the people. Dr. Olowopopo makes Africa closer to us and us to Africa,” Davis said and praised the celebrant for his humility and selfless service to the country. Friends and dignitaries danced to Fuji tunes like oke agba logun, lawu-erebe, Nigerian community in America and future leaders tunes which filled the air in preparation for the arrival of Governor Tinubu and Oba Akiolu of Lagos.

Waving his white horse tail (Irukere), everybody in the hall stood up to welcome the royal father into the hall while Wasiu Ayinde entertained the crowd with “kabiyesi ma wole, olowo Eko mawole.” It appeared as if the king had extended his territory to Chicago.

Beaming with smiles in his flowing white attire, the king prayed and thanked all in the hall for their hospitality and wish Drs. Olowopopo and Shefiu Amuwo, another Lagosian marking his birthday on September 19th long life and prosperity.

“God will always be with you and bless you. You came here in search of greener pastures, God will grant you the desires your hearts and your dead bodies will not be carried home,” he prayed.

Turning to Gov. Tinubu, he said “God appoints a leader, He will not desert you in time of your need. Lagos will witness economic growth, social development and security and economic prosperity during your time as the chief helmsman of Lagos,” he prayed.

Olowopopo yielded the microphone to Tinubu who reciprocated the gesture and wished the Oba peace and prosperity during his reign. He described Congressman Davis as “a wonderful brother always ready to help in terms of needs. We appreciate all you’ve been doing to visiting Africans here,’ and invited him and Mayor Daley to Lagos in February.

Gov. Tinubu described Olowopopo as a “big brother” who trained him on arriving in Chicago to further his education many years back. “When I arrived here he guided and tutored me. Unknown to him then that he was molding a future governor of Lagos state,” Tinubu said.

The governor explained that Olowopopo was also on hand during the agitation for democratic government in Nigeria during the dreaded Abacha junta. “I called him from prison and he took it from there as a challenge. He visited Washington DC campaigning for the freedom of playwright Ken Saro Wiwa hanged by the Abacha government,” he said. “It is very unusual to see the governor and Oba of Lagos attending a birthday party if not for his selfless service, commitment and patriotism. And this is the first international outing for the Oba.” Tinubu said.

Lagos State presented an artwork postcard read to the audience by the Lagos State Information Commissioner, Dele Alake. Enthused by encomiums poured on him, Dr. Olowopopo waved and thanked the crowd for attending the party and wished them the best of luck in all their endeavors.

Bond set at $50K for father of July 4 shooting suspect