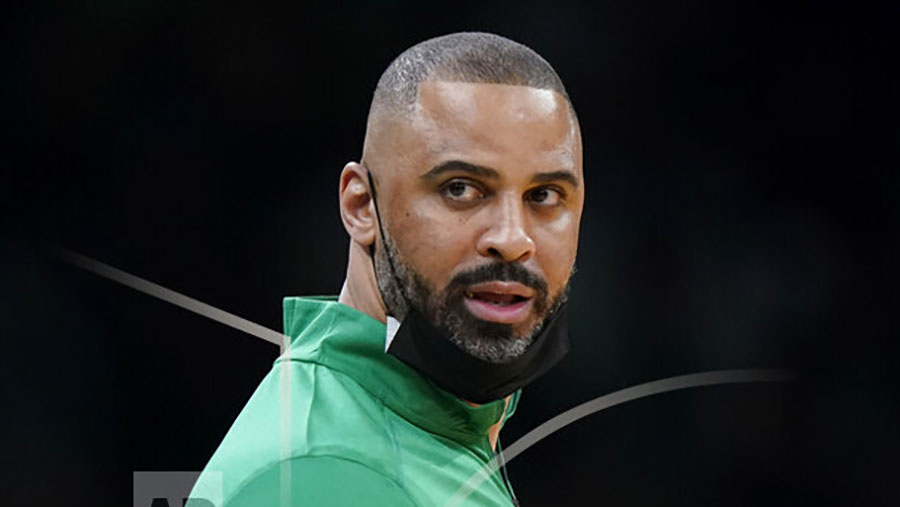 FILE - Boston Celtics head coach Ime Udoka speaks from the bench during the first half of an NBA basketball game against the Charlotte Hornets, Wednesday, Feb. 2, 2022, in Boston. The Boston Celtics are planning to discipline coach Ime Udoka, likely with a suspension, because of an improper relationship with a member of the organization, two people with knowledge of the matter told The Associated Press on Thursday, Sept. 22, 2022.(AP Photo/Steven Senne, File)
Share
Facebook Twitter LinkedIn Pinterest Email

BOSTON — The Boston Celtics are planning to discipline coach Ime Udoka, likely with a suspension, because of an improper relationship with a member of the organization, two people with knowledge of the matter told The Associated Press on Thursday.

The people spoke to the AP on condition of anonymity because the reigning Eastern Conference champions have not revealed any details publicly. The exact punishment, including the length of the possible suspension, has not been determined.

One of the people who spoke with the AP said the Celtics have decided that assistant coach Joe Mazzulla will take over the team on an interim basis if Udoka is suspended.

ESPN first reported Wednesday night that a suspension was under consideration for the team policy violation. ESPN and The Athletic later reported that the Celtics’ investigation revolves around whether Udoka had an inappropriate relationship with a member of the organization.

Losing Udoka would be a significant blow to a team that is widely considered among the favorites to contend for an NBA title this season, after falling only two games short of winning the championship last season in his debut year.

The Celtics open training camp on Tuesday. If Udoka — who was fourth in the NBA’s coach of the year balloting last season — will not be allowed to lead the team, it would add to a run of issues the club is facing going into the start of formal practices.

Boston made some big moves early in the offseason, acquiring Malcolm Brogdon in a trade from Indiana to bolster an already-strong backcourt, then added sharpshooting veteran forward Danilo Gallinari as a free agent.

But last month, Gallinari tore the ACL in his left knee and will be lost for the coming season. Center Robert Williams, a major part of Boston’s defensive scheme who played through knee issues during last season’s playoffs, is still dealing with knee problems and isn’t expected to be ready to start this season.

The Celtics were also mentioned prominently in trade speculation surrounding Brooklyn forward Kevin Durant, a perennial All-Star who wanted to be moved elsewhere by the Nets — then pulled back that demand after several weeks.

And now comes the Udoka matter.

Mazzulla interviewed for the Utah Jazz coaching job this summer, a position that ultimately went to Will Hardy, another one of Udoka’s assistants in Boston last season. Udoka’s other assistant coaches are Damon Stoudemire, Ben Sullivan, Aaron Miles and Tony Dobbins.

Udoka had a brilliant first season as coach of the Celtics, finishing the regular season at 51-31 — going 26-6 in the final 32 games — and leading Boston past Brooklyn, Milwaukee and Miami on the way to the NBA Finals. The Celtics lost the title series to the Golden State Warriors in six games.

It’s the second major disciplinary situation in as many weeks in the NBA, following the decision last week by Commissioner Adam Silver to suspend Robert Sarver — the owner of the Phoenix Suns and WNBA’s Phoenix Mercury — for one year and fine him $10 million after an investigation showed his pattern of disturbing workplace conduct, including abusive and racist language. Sarver said Wednesday he intends to sell his teams.