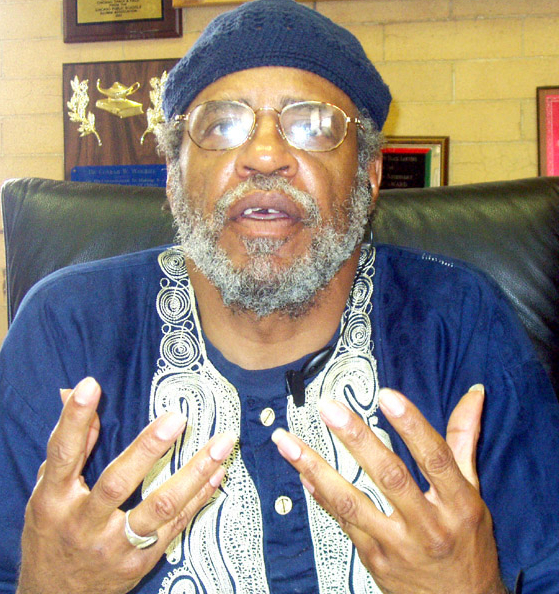 Dr. Conrad Worrill, professor and academic coordinator of Inner City Studies Education at Northeastern Illinois University Center for Inner City Studies  is better known  for his pro-Africanism and demand for reparations for what he called “injustice done to the Black race.”

He spoke to Joseph Omoremi, editor of  The Chicago Inquirer  on the cries for reparations and urged Blacks, especially African immigrants to the Western world to “reclaim African view” for the posterity of the next and lost generation.”

It is an exciting reading. Excerpts:

Inquirer: Can you give a simple and clear definition of reparations your organization is seeking?

Dr. Conrad: The concept of reparations centers on: Has the African people been damaged? The answer is yes. How were they damaged? And for how long were they damaged? What was damaged? Much was damaged. The culture, the land, the religion and theft of artifacts. Africa was ravaged by the Europeans and to some extent, by the Arabs. Reparation is the concept that seeks repair for those damages. For those of us who have conscience in the Pan-African movement, we are seeking for this repair. One major mechanism that all African people around the world are united around is the demand for reparation.

Inquirer: But reparation is not an issue in the African countries, especially since Bashorun M.K.O. Abiola died.

Dr. Conrad:  The late Abiola did trie for reparation but the whole mechanism of reparation goes back before Chief Abiola.  The damage done by the colonialists affected the whole of Africa. Whether it is Ghana or Nigeria, Liberia or the francophone countries, because the French too owe reparation to its colonies in Africa. The Italians, the Portuguese and the entire slave trading nations that colonized Africa owe reparation. Period. There is no argument even those among our own that don’t agree with us never forget what happened.

Inquirer: What kind of repair are you seeking?

Dr. Conrad: Reparation could occur in many forms. It has to be clean with no strings attached. A lot of African artifacts are in a lot of museums in Europe. As for Africa, one of the main issues will be debt relief. As for Africans in this country, I mean people like me; it means education, healthcare, no military service, tax relief or no taxes payment for a period of time. The mechanism that many of us are calling for is putting this in a trust fund so that it could be used to correct many of the social and racial lapses that occurred in the past.

Inquirer: Can you expatiate on the trust fund?

Dr. Conrad: A trust is to be managed by a legitimate organization. Actually, Joseph, you know and I know that they can’t pay us for what they did to us.  The money is really not the issue. You can’t compensate for the loss of lives. African people lost between  50 to 100 million lives to slave trade. Over the last year, organizations like the National Coalition for Black for Reparation (NCBR) and the National Black United Front (NBUF), the Nation of Islam and many other organizations have come together and tried to build unity for the demand for reparation movement in America. The major issue in the presidential sweep stakes is the issue of reparation. Mr. (John Kerry-Democratic presidential candidate) said reparation would divide the country. We’ve written both presidential candidates asking for their positions on reparation. Kerry was asked at Howard University and many places where Blacks are substantially present. Just last week, Kerry finally conceded that he would meet with Congressman John Canyon who is the sponsor of the HR40 reparation study bill.

This bill did not call for reparation but called for a study of what happened during the time of slavery. This is the tactics the Japanese used to secure reparation. It was a congressional commission. In 1988 and 1989, Congressman Canyon taking a page from the Japanese put forward legislation called Slavery Study Commission. Now Kerry, as a result of the challenges facing him since he is a Democrat and since most Black people vote Democrat, the question is what are African people and Black people in the country going to get out of Kerry for their vote. We say if Black people are going to give their votes to the Democratic party, then the Democratic party has the obligation and responsibility to respond to a critical demand that African people are putting on the table and that demand is reparation. As a result of the swelling of grassroots forces across the country, Kerry is now forced to say he will at least meet with John Canyon. Prior to that, he said reparation would divide the country. The country is already divided. The country is divided on John Kerry. The country is divided in so many ways.

Inquirer: In dollars and cents, what figure are you seeking from government and organization that facilitated the damage done to the Black people in the past?

Dr. Conrad: We are not going to try to solve their problems. That is their problem. Our issue is that they should repair the damage that they created. The unjust enrichment of European descendants in America. The Trans-Atlantic slave trade built Europe. It built America. The African people in this country built America. They did this for 400 years of free labor. The question of how much it would cost to repair these damages is not our issue, it is their problem. Our concern is the repair.  Our issue is to challenge and negotiate, to reach some settlement on these demands.

Inquirer: Why so many differing groups instead of a coordination group agitating for reparations in different format?

Dr. Conrad: What has happened in the reparation movement, many tactics and strategies that are taking place. One of them is the legal strategy. Here in Chicago, over the past year, we’ve been going to court and we are taking several corporations  that had ties with slavery tto court. We filed a lawsuit and we had plaintiffs from around the country and the case was dismissed without prejudices. This means you can come back and seek remedy. The lead attorney is an Asian. The Asian people are demanding reparation. The Asian was working around the legal strategy for corporate restitution through a lawsuit. From 1896-1954 in America, legal segregation under the law was a major issue that Black people organized around to dismantle racial segregation under the law. In 1954, Browns vs. Board of education gave credence to the civil rights movement. Racial segregation under the law was victorious. The question now is: what about the damages and the repair? What we are saying, just like the period 1896-1954, throughout the 1960s that ended the eradication of racial segregation under the law is a major issue that united Black people in America. We are saying the major issue that united not only Black people in America but also African people worldwide is the issue of reparation.

Inquirer: What are you seeking from the corporations?

Dr. Conrad: It is the same thing the United States government will give-negotiation. That is what the ordinance from Alderman Dorothy Tillman, her effort, her Slavery Ordinance Act which is an ordinance that says corporation doing business with the city of Chicago have to fill out an affidavit to identify whether or not they had ties with slavery to do business. It has been revealed that J.P. Morgan had revealed their connection to slavery. We must thank Alderman Tillman for putting the pressure on these organizations. We have the legislative strategy, you have the legal strategy and grassroots organizing strategy. We have the research and scholarship strategy, all of these strategies are occurring at the same time.

Inquirer: What are you going to do with the J.P. Morgan revelation?

Dr. Conrad: J.P. Morgan could literally end the debt of most of the Black colleges in the south. Some of the colleges are about to close down. There are many ways in which J.P. Morgan and corporations which benefited unjustly and companies that are still benefiting as a result of their involvement in the cotton industry that slaves picked for free for 246 years. This has to be understood. You used Blacks as laborrs and made them less than human by turning or reducing them to property and commodities and this process led to an economic enterprise and you are telling me that you don’t have or you should not provide any compensation for this injustice? We think the companies owe us and should pay for their unjust enrichment. If the Jewish people can say, “never forget,” that is their slogan, why should African people forget what happened to them in the past? Our case in the world is the worst case scenario of inhumanity. African people are great people who gave much to the world and contributed so much to civilization. We are at the bottom of the world because of what happened to us.

Inquirer: What are the challenges before the movement?

Inquirer: But there is unhealthy rivalry between  African immigrants and African Americans.

Dr. Conrad: That is purposeful. That is part of what they did to divide us to make it look as if we are different. The European system they created was the system that caused us to hate each other.

Inquirer: How can the system be reversed?

Inquirer: What is your advice to the African immigrants and African Americans?

Dr. Conrad: They should put down their petty differences and understand the Pan-African obligations. We should integrate with each other. The perception by African immigrants that African Americans don’t like them because of the language difference is not true and vise versa too.  We are Africans, born in America.

Inquirer: But many African Americans don’t see things that way?

Dr. Conrad: I will say, to some extent, some of our people have legitimate complaints. There are almost 10,000 Black elected officials in the country. They include state senators and  congressmen for many years. The question is has the condition of African Americans  been improved? I think some shackles have been taken off. So therefore our people have become somehow suspect of leaders and leadership. What we have to do is to continue to organize not only against exploitation and oppression externally but oppression and exploitation among our own people.    Right now, with the drugs in our community, and with the criminalization of black men and with the school system falling apart and with our people continuing to be mis-educated, we need a whole lot of work to do.

In 1993, Chief MKO Abiola of Nigeria held the first Pan-African conference in Abuja, Nigerian capital and invited African people all over the world to participate. That was a great start to pan-Africanize the reparation movement. We are still following the movement till today.

Inquirer: Was that the beginning of the movement?

Dr. Conrad: It was not the first time but he helped revitalize the movement.

Inquirer: We’ve not heard much since he died?

Dr. Conrad: That is not true. At the UN world conference against racism in Durban, South Africa, almost the majority of African countries were in support of the demand for reparation.