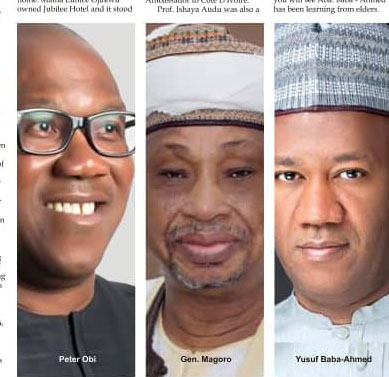 Defeating former governor Ahmed Makarfi was newsworthy, it did not make me look the way of Yusuf Datti Baba-Ahmed when he migrated from the House of Representatives to the Senate in 2011. Gen. Muhammad Magoro came into the picture.

The Senate was in session and Baba- Ahmed stood up to speak. Senate President David Mark granted him permission. I wanted to hear this young man who snatched the Kaduna North Senatorial zone slot from the Federal Government College, Enugu trained Makarfi.

” I cannot address senators as distinguished colleagues. There are people here who are far my seniors. I don’t see myself addressing a man like Gen. Magoro as colleague,” Baba – Ahmed declared. That appearance is something I remember all the time.

We are Africans. Tradition teaches us to  honour elders. Americans and Europeans may call  persons old enough to be their grandfathers by first name, it is alien to all of us here.

Magoro, now 81, is older than the head of the Baba -Ahmed family, Mahmoon. The eldest of the Baba- Ahmed daughters, Mahaddiya is in her seventies like her elder brother but she dares not call him by  his first name. Yusuf was well brought up in this regard.

Baba- Ahmed was a toddler when Magoro was Federal Commissioner for Transport under Gen. Olusegun Obasanjo in 1978. He was a fresh school boy when the general served as Gen. Muhammadu Buhari’s Internal Affairs minister between 1984 and 1985.

Some other politicians, full of airs, would not have accorded much respect to Magoro as they sat together in the Senate. The Indomie generation would refer to him as ancestor who should stay home as a Civil War veteran instead of sharing seat with them.

Yusuf has joined Labour Party and is Peter Obi’s running mate. I am not surprised even if some conservatives are. Growing up in Zaria comes with qualities that are rare among many Nigerians. That is a plus for people with political ambitions.

In pre Fourth Republic Zaria, background did not matter so much. There was religious tolerance and the environment encouraged scholarship. Yusuf’s father, Baba Ahmed was an Islamic scholar but he encouraged his children to acquire Western education.

This has made it easy for the son of an imam to unite with Peter Obi, a Roman Catholic with  Reverend Father and Reverend Sister siblings, in the bid to chart a new course for the country. What Nigeria needs now is solution not religion.

Gen. Yakubu Gowon is a Zaria Boy so was Chief Emeka Ojukwu. The first Northern Nigerian lawyer, Abdul Ganiyu Folorunsho Abdulrazaq lived there as a lawyer. None of the trio hailed from the town but they were well accepted.

Ojukwu joined the Army in 1957 from his mother’s Zaria home. Mama Eunice Ojukwu owned Jubilee Hotel and it stood till the Ikemba died. That was the property he willed to his daughter, Tenny Hamman, born of a daughter of the soil.

Ojukwu’s half siblings, Esther and Tom Biggar also lived in Zaria. Their dad was  from Scotland. Esther is mother- in- law  to former Miss Nigeria, Helen Prest. Tom, a pilot, died as a Biafra Army lieutenant with Chukwuma Nzeogwu around Nsukka during the war.

Abdulrazaq attended primary school in Onitsha with Professors Ben Nwabueze and Green Nwankwo. His wife, Raliat was born in Aba and today, their son is governor of Kwara State. While Ojukwu lived in exile in Abidjan, Abdulrazaq was Ambassador to Cote D’Ivoire.

Prof. Ishaya Audu was also a Zaria man. He chose former Miss Ohiorhemian as wife. These were the people who made Zaria bubble and all of them knew Baba- Ahmed’s home in Tudun Wada. Gowon also knew the Baba at Barewa College.

Yusuf sees Nigerians as one. As Founder of Baze University, Abuja, he named one of the Blocks after Rose Okwechime. His national service was in the South- West, Abeokuta to be precise.

As Yusuf campaigns for 2023 in what has been tagged the Obi- Datti ticket, he needs to get even closer to Magoro. The general is not happy with the security situation and in 2021, he advised Buhari on how to tackle the terrorists shaming the country.

Political thuggery and the Nigerian Factor

The Oddities of Nigeria