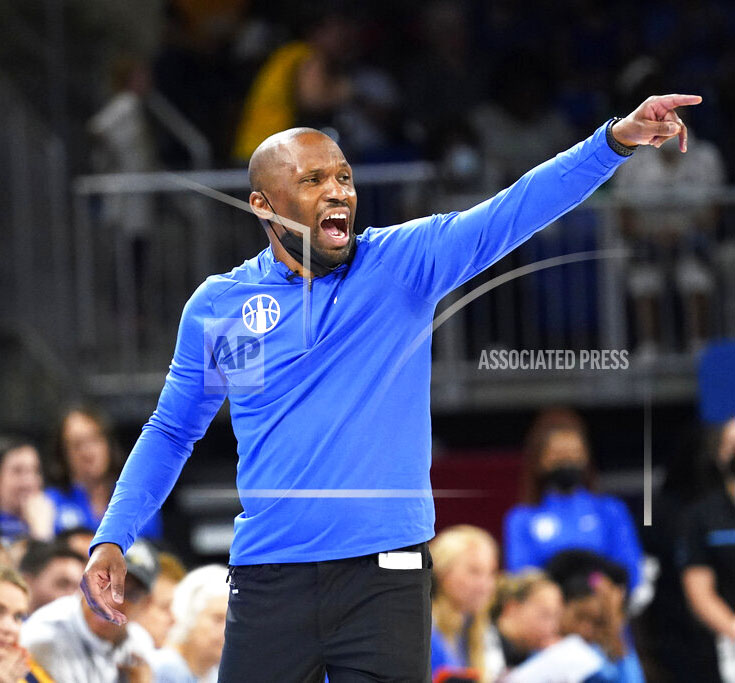 Chicago Sky coach James Wade gestures to the team on defense during the first half of Game 2 in a WNBA basketball playoffs semifinal against the Connecticut Sun on Wednesday, Aug. 31, 2022, in Chicago. (AP Photo/Nam Y. Huh)
Share
Facebook Twitter LinkedIn Pinterest Email

CHICAGO (AP) — Candace Parker can appreciate that the Chicago Sky seem to dial up their best basketball whenever their backs are against the wall.

That certainly was the case as Parker scored 22 points and the Sky evened the semifinal series with an 85-77 win over the Connecticut Sun in Game 2 of the WNBA playoffs on Wednesday night.

But what the two-time WNBA champion really wants to see the Sky is begin to play better when coming off wins instead of defeats.

Chicago coach James Wade said pregame that Chicago was “going to make shots” Wednesday after a lackluster 35.3% shooting performance in Game 1. The Sky responded by hitting six of 10 shots to open the game, and finished the night 32 of 63 (50.8%). All five starters scored in double figures for Chicago.

Game 3 is in Connecticut on Sunday.

Jonquel Jones scored a team-high 23 points for the Sun on 10 of 17 shooting, adding seven rebounds and two blocks.

The Sun never led after Jones hit a 3 on the first possession of the game.

Wade praised Parker for her consistency since joining Chicago ahead of last season and said she is particularly motivated by the belief that the Sky are capable of repeating as WNBA champions.

“She wants to do everything in her power to get another championship,” Wade said. “And so that’s where I think you see, I wouldn’t say desperation, but urgency.”

Forward Emma Meesseman found her rhythm with back-to-back baskets in the opening minutes after a 4 of 11 shooting performance in Game 1. The 6-foot-4 forward finished with 14 points on an efficient 6 of 8 shooting clip to go along with seven rebounds, three assists, and a pair of steals.

Jones and Odyssey Sims keyed a 6-0 Connecticut run early in the second quarter, but Chicago responded and pushed the lead to 10 on Courtney Vandersloot’s layup. The Sky carried a 47-32 lead into the half after hitting 19 of 31 shots.

Sun point guard Natisha Hiedeman added 14 points on 6 of 10 shooting with most coming in the second half.

“They were getting everything that they wanted,” Hiedeman said. “We didn’t come out with the same energy it felt like.”

DeWanna Bonner went 0 for 6 from the field and finished with two points after leading the Sun with 15 points in Game 1.

“You could feel some of the frustration that we were missing wide open shots against their aggressiveness and rotation,” Connecticut coach Curt Miller said.

Parker capped her scoring contributions with a turnaround jumper near the baseline and a 3 at the 6:17 mark which gave Chicago a 76-56 cushion.

She said limiting the Sun to six second-chance points on seven total offensive rebounds was crucial in the winning effort.

“It’s making those shots hard, and I think also, it’s finishing the play with a rebound,” Parker said. “Today we did that. We were able to do that and we have to continue to do that because (the Sun) are a great team.”

It might not have shown on the court, but Parker made sure at halftime to check in on how another iconic athlete, Serena Williams, was faring in her second round match in the U.S. Open. Williams extended her legendary tennis career with an upset win over No. 2 seed Anett Kontaveit in three sets.

“I was keeping up at halftime,” Parker said. “When I saw she won the first set, I was hyped.”

The 36-year-old sees plenty of similarities between she and Williams as they continue to dominate so deep into their respective careers.

“I know you can’t teach an old dog new tricks, but we can better our tricks a little bit,” Parker said. “I think the game slows down and I think Serena, her serve, you don’t have to be mobile to serve (like she does). You’re not returning her serves. I think it’s just working on the things you’re really good at and playing more of that mental game.”

Parker passed Briann January on Wednesday for fifth all time in playoff assists with 239. … Jones made a pair of blocks to tie Taj McWilliams-Franklin for second all-time in Sun history with 26 career playoff blocks. … Quigley hit the 64th playoff 3 of her career to move into a tie with Crystal Robinson and Nicole Powell for 13th in playoff history. … Connecticut outscored Chicago 9-0 in the fourth after entering the final period down by 17.

The series shifts to Connecticut on Sunday afternoon for Game 3.