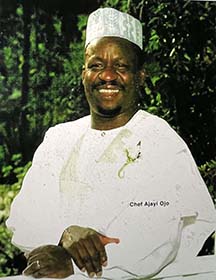 When national honors are dished out, the elite in politics, business, social and cultural affairs mostly benefit. Rarely has a chef been accorded such recognition. Recently, Nigeria, African most populous country, broke the ground in this category by granting a national award to a chef well known for feeding the elite well.

Chef Ajayi Ojo was among several others who received national honors on December 16, 2004 at an impressive ceremony in Abuja, the Nigerian capital. Nigerian officials noted that national honor is the height of recognition in all endeavors in any society. And this is why the selection of the official chef to Ambassador Bashir Aminu Wali, Nigeria’s Permanent Representative to the United Nations for this year’s honors’ roll is important.

Mr. Ojo is a name that top UN diplomats, visiting personalities and Nigeria’s top policiticians love to hear. The mere mention of Ajayi ahead of a reception by either the Nigerian Mission to the UN or the country’s Consulate-General in New York is enough ingredient to attract full attendance by guests. The magic sandwiched in the name is his menu.

Born in 1948 to a farming family in Ikogosi, Ekiti state of Nigeria, Ojo began a simple and humble life. He attended elementary and high schools in Ikogosi, before heading for Lagos, the former Nigeria’s capital in search of greener pasture. He was hired by a consultant at the Lagos University Teaching Hospital (LUTH), Dr. Eugene Odunjo as a houseboy. “My job included cleaning the house, doing my boss’ laundry and cooking his meals,” he said. That was Ajayi’s life until 1969 when he met one Ambassador Lesley Harryman, a close friend of Odunjo.

Harryman was Nigeria’s top diplomat to France then. After eating from the young Ajayi’s meals he pleaded with his friend to release the lad so he could take him to his base in Paris as a domestic servant. “That was how I went to France with him, and I worked for him as a personal staff. But when the embassy’s chef left in 1974, he hired me as the official cook,” Ajayi recollected. “Today everybody is saying Ajayi is good in cooking. But Harryman is a good person.

He taught me all the menus I cook. If he went to eat in any restaurant he would walk to the chef and ask for the recipe for particular menus. He would return home and ask me to buy the stuff and all the ingredients, and both of us would try it together,” he said. Describing Harryman as friendly and Godly, Ajayi told The Chicago Inquirer that when the Ambassador was posted to New York in 1975 as Permanent Representative to the UN, he took him along and they worked together until the ambassador’s deployment in 1979. In his words, “You can’t compare Harryman. He is very unique. Like all my bosses, anyone who allows you to work in his house has done you a great honor.” With the exit of Harryman, all successive ambassadors of Nigeria to the UN retained Ajayi as official cook.

Between 1979 and 1982, he served Ambassador Edwin Clarke; Yusuf Maitama Sule, from 1982 to 1983; Ishaya Audu briefly in 1984; Gen. Joseph Garba from 1984 to 1989; Ibrahim Gambari between 1989 and 1999, Arthur Mbanefo from 1999 to 2003; and currently Ambassador Bashir Aminu Wali. Asked how he satisfied all his bosses, knowing fully well they all came from diverse cultural backgrounds with respective food preferences, Ajayi said he discovered that all senior Nigerians he interacted with ate all Nigerian foods without discrimination. “When Maitama Sule was here I cooked ‘tuwo and mian-kuka’, which is prepared the same way we do pounded yam,” he said. On his techniques for varying menus, he said, “From the way Harryman presented cooking to me, anytime I am in the kitchen I feel more relaxed and I do all the cooking with passion. I enjoy being a chef. I have no regrets being a chef, because it helps me to meet many people, the best people in the world that no other job can afford me.” President Olusegun Obasanjo who ate Ajayi’s meals first as military head of state in 1977, has passion for his menus each time he was in New York for the UN engagements or other state functions. Second Republic President Shehu Aliyu Shagari ate from Ajayi’s kitchen in 1984. Other personalities catered for by this man were Gen. Ibrahim Babangida, Chief Ernest Shonekan, Gen. Abubakar Abdulsalami and Chief Tom Ikimi.

Abdulsalami had said: “I like your food very well”. IBB once told Gambari, “This your cook is cooking well.” For Ikimi: “I want Ajayi food.” He credited the late Gen. Joseph Garba for initiating the first move for his national honor. “He had many entertainments, because it was the time apartheid was on the ground and Nigeria was seriously fighting it. We had many dinners, many lunch programs with many diplomats coming and I had to do all the cooking. In fact he is a good friend. It’s a pity he died. I spent more time in his village, Langtang than mine whenever he was on break. I miss him badly.

He is a scholar too.” He also described Gambari as special. Like the era of the late Garba, he said many conferences were held by the Nigerian Mission under the Ilorin Prince. But this time apartheid had crumbled. Nigeria was on the brinks of been isolated by the international community over internal political crisis orchestrated by military dictatorship under the deceased Gen. Sani Abacha. “Gambari had a lot of meetings and he did the job very well. He fought and succeeded in preventing UN from suspending Nigeria. He is a fine man. In deed there is no word that can qualify his finesse. More so I don’t compare people because every human being is unique.”

Ajayi further dedicated his national honor to former PR Mbanefo. “He also recommended me for the national award. He is a gentleman. He is not a traditional elite. He ate mostly fruit vegetables, salad and fish.” ­­Ajayi who married in 1992 to a Trinidad lady he met in New York, said he bought all his ingredients from the Bronx terminal market in New York city. He admonished younger Nigerians not to shun certain jobs as dirty. “I am satisfied the moment I see people eating my food with satisfaction. It’s a big reward for you as a human being.”