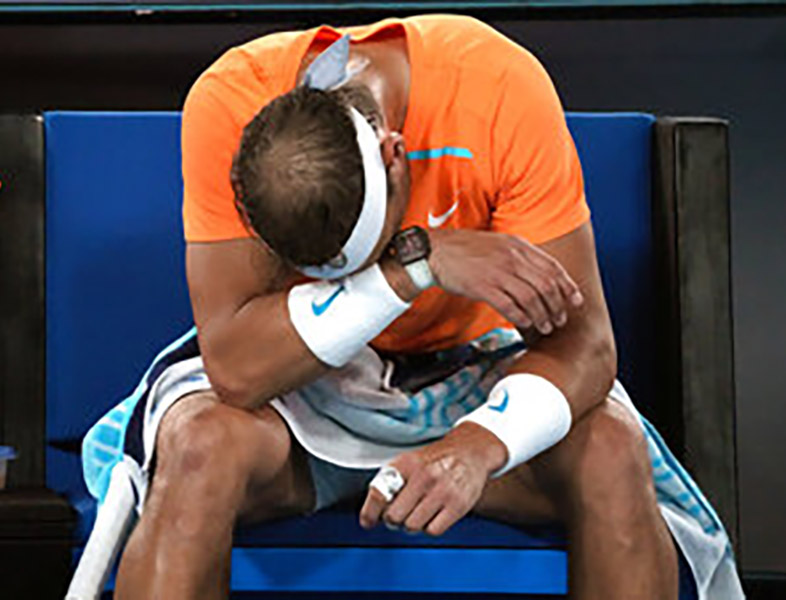 MELBOURNE, Australia  — Rafael Nadal bowed his head during changeovers and rested his elbows on his knees, the very picture of resignation.

What already was a poor start to 2023, following a year marred by all manner of health issues, reached a low point at the Australian Open on Wednesday.

The defending champion and No. 1 seed at Melbourne Park, Nadal injured his left hip and lost to Mackenzie McDonald 6-4, 6-4, 7-5 in the second round, abruptly ending his bid for a record-extending 23rd Grand Slam trophy.

“It’s a tough moment. It’s a tough day,” said Nadal, a 35-year-old Spaniard. “I can’t say that I am not destroyed mentally at this moment, because I would be lying.”

He pulled up awkwardly at the end of a point late in the second set against the 65th-ranked McDonald.

Nadal was visited by a trainer on the sideline, then left the court for a medical timeout. Up in the stands, his wife wiped away tears. Nadal returned to play, but was physically compromised and not his usual indefatigable self, saying afterward that he could not hit his backhand properly and could not run much, either.

But Nadal added that, as the reigning champion of the tournament, he did not want to leave the court via a mid-match retirement.

He said the hip had been bothering him for a couple of days, but it was never as bad as it became on Wednesday. Nadal was not sure exactly what the nature of the injury was, saying that he will have medical tests to determine if it has to do with a muscle, joint or cartilage.

“He’s an incredible champion. He’s never going to give up, regardless of the situation, so even closing it out against a top guy like that is always tough,” said McDonald, a 27-year-old American who won NCAA championships in singles and doubles for UCLA in 2016. “I kept focusing on myself in the end and got through.”

This is Nadal’s earliest exit at any Grand Slam tournament since bowing out in the first round in Melbourne in 2016 against No. 45 Fernando Verdasco. That also made Verdasco the lowest-ranked player to defeat Nadal in Australia — until, of course, McDonald on Wednesday.

McDonald has never been past the fourth round at a major tournament. In his lone previous matchup against Nadal, at the 2020 French Open, McDonald won a total of just four games in a lopsided loss.

A year ago, Nadal won the Australian Open for the second time to earn his 21st major championship, then raised his total to 22 — the most for a man — at Roland Garros.

He is currently ranked No. 2 but was the top seed at Melbourne Park because No. 1 Carlos Alcaraz is sitting out the Australian Open with a bad leg.

Nadal’s body has betrayed him quite a bit recently.

He needed pain-killing injections for his left foot on the way to winning the French Open last June, pulled out of Wimbledon last July before the semifinals because of a torn abdominal muscle and also dealt with a problem with rib cartilage in 2022.

Nadal’s exit drains the tournament of yet more star power. In addition to his absence and Alcaraz’s, 2022 Wimbledon runner-up Nick Kyrgios pulled out because his left knee needs arthroscopic surgery, four-time Grand Slam champion Naomi Osaka is off the tour while she is pregnant, two-time major champ Simona Halep is serving a provisional doping ban and Venus Williams is hurt.

That is all on top of this: The 2023 edition of the Australian Open is the first Grand Slam tournament since Serena Williams and Roger Federer announced their retirements.

Nadal arrived in Melbourne with an 0-2 record this season, making him 1-6 dating to September, when he lost to Frances Tiafoe in the fourth round of the U.S. Open.

Even during a first-round victory Monday, a four-setter against a cramping Jack Draper, Nadal never quite seemed to be at his chase-every-ball, put-every-high-spin-shot-on-target best. He looked, somehow, his age.

The same was the case from the outset against McDonald.

“I’m really happy with how I started that match. I thought I was playing really well, serving great, returning well, too,” McDonald said. “So I was really taking it to him.”

That is true. From the get-go, McDonald was on, Nadal was off.

The very first game served as something of a harbinger: McDonald broke for a 1-0 lead thanks a trio of unforced errors by Nadal — two off his feared lefty forehand side.

Out of sorts, Nadal got into a back-and-forth with chair umpire Marijana Veljovic during breaks in action about whether she was starting the between-points serve clock too quickly for his liking.

Soon, McDonald was up a set. Then he went up a break right away in the second.

After one point in that set, Nadal showed real signs of trouble. He squatted behind the baseline and placed his racket down on the court. Then he went over and leaned on a sign, prompting Veljovic to ask whether Nadal was OK.

Nadal watched a couple of serves off McDonald’s racket fly past him, then was checked on by the trainer. While the match would proceed, it essentially was over right then and there.