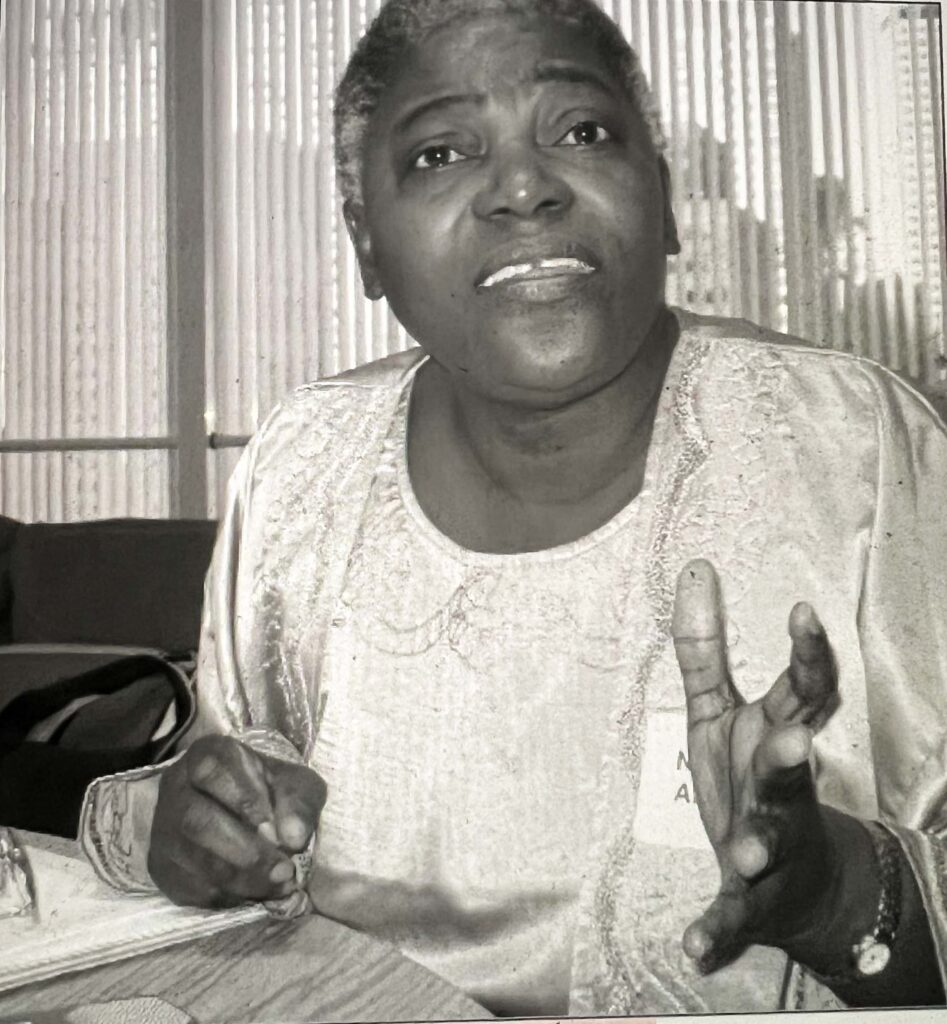 In March 2004, we published an interview with Septuagenarian David Olupitan on the genesis of mistrust between recent African immigrants and African Americans as well as Blacks born outside the shores of the Black continent. A Jamaican American journalist and head of Sovereign African Diaspora Nation in New York, Neferrari Ahmose, read the interview and disagreed on some reasons adduced in the interview. She gave what she perceived as the missing links in another interview with Joseph Omoremi, editor of The Chicago Inquirer, during the meeting of Association of African Journalists in Nigerian House, lower Manhattan New York. Excerpts:

Inquirer: Could you give a brief introduction or background information about your self?

Ahmose: My name is Neferrari Ahmose; I was a journalist in Jamaica for the Jamaica Daily News between 1974 and 1980. I came to the USA in 1975 and lived in California and attended Los Angeles Valley College, majoring in journalism. I went back to Jamaica and practiced journalism and returned to the USA via New York and joined African Expression between 1982 and 1991.

There was no Black business and the owner couldn’t afford to sustain it. There was no sponsor to help the newspaper. My friend introduced me to a job as a “Live-In- Aid- where I took care of the elderly and their home. I did that job between 1980-2000.There was nowhere out for Black community who were at the grassroots except doing odd jobs. We weren’t all that organized and we didn’t have what it takes to work together.

We were individualistic and apart. We didn’t have an ideology. We were just survivals. To survive, you need to be united and have contact, negotiating for equality; we didn’t have this. You must have knowledge about one another. Right now, we are at the moment in time at the conference of the Association of African Journalists where the connection could be made. The African immigrants see the Western world as a wonderful place and wonder when they see our situations. It is like the African Caribbean managed to have self-government and independence. The African American doesn’t have that.

Inquirer: What do they have?

Inquirer: What is your view about that?

Ahmose: That is exclusion. The Blacks were coming out of slavery, they’ve lost their language, they’ve lost their ethnicity, and they’ve lost their ability to work together. Slavery is an institution that owned a person. White families owned blacks. They were in conduit with a foreign culture. They were in conduit with White man culture. They accepted the Whiteman culture because they were not allowed to go to school, they couldn’t go to church. They were not given the chance to work together and fend for themselves. Before New York got emancipation, Blacks in New York got emancipation in 1827 and some Black leaders tried to start a newspaper. So it was there the struggle started but since we were not in-group and we lacked the ideology, we didn’t have the initiative to make it as a group, we got stranded. We got segregated from each other. We embarked on survival. We didn’t think of building institutions that would ensure the collective survival of other people, we were after individual survivorship.

Inquirer: Has the Black race overcome that today?

Ahmose: We have the people. Our unity lies in the tribes. That is where all our equals are. We have the language, we have the rulers, we have the culture, and we have the tradition. These are the things the African American and African Caribbean lack because they lost everything during slavery.

Inquirer: Earlier you were trying to explain some reservations among African immigrants, African Americans and African Caribbean. You said there are things they don’t understand about each other. Elaborate?

Both didn’t have the basics of their unity because that was destroyed. The basis of their unity was based on a second or third class culture. It was later when people got educated that leaders like Dubois and others came along with the thinking about unity and struggle. People like Marcus Garvey, Dubois came along. Inquirer: What about the efforts of Martin Luther King, Jesse Jackson and other civil rights leaders? Ahmose: These are the civil rights leaders. Before them were Dubois and others. These were the people who were descendants of what the African Caribbean and African immigrants had in Africa. They fought for the independence of Africa and in the African Caribbean countries but this wasn’t true of the African American. They didn’t get independence. What they got was civil rights. They got the rights to vote, they got the rights to public accommodation and could go to hotels and could swim in hotel and could go to restaurants and all that. This was given to them initially and this was what constituted the civil rights movement, which the likes of Jesse Jackson and Martin Luther King fought for and got.

Inquirer: Jamaican Blacks and African immigrants share some family values, which are slightly different from African Americans. Where is the missing links?

Ahmose: In Jamaica, Africans could to the bush and form a community. They have independent settlement. You might have heard about the Maroons. They kept together their identities. What happened was that there was a rebellion in 1865 and they left the plantation and became known as the maroons. When the British came to Jamaica in 1665, these Maroons fought them and the British signed a treaty with the Maroons in around 1731 or 1732.

In that treaty they agreed to capture any of those slaves (Blacks) and those attempting to join them in their freed world. They were to refuse any slaves from joining them. In essence, the refuge base for the slaves was disrupted because the Maroons weren’t accepting run-away slaves anymore. Around 1865, things were very bad for the slaves and they weren’t getting food, shelter and healthcare and things like that. And the Maroon caught their leader and gave him up to the English, and the English hanged him. As a result, there was a rift between the Maroons and other Blacks.

The Maroons in different parts of Jamaica were disturbed. They reckoned that they need to work together instead of against each other. They started fighting the English and slaves owners and started accepting run-away slaves or Maroons. They accepted all those that came from Jamaica and Canada. The move heightened the agitation for independence among Maroons worldwide.

Inquirer: How united are blacks in Jamaica?

Ahmose: There are still flimsies of disagreement among Blacks in Jamaica. It dates back to the struggle for freedom. People like Marcus Garvey fought for blacks. He was for the Blacks people but Marcus Garvey was not accepted in Jamaica. He came to America and was accepted. He had one of the biggest movement and had millions of supporters in America and worldwide. Currently, Jamaicans have independence and independence under colonial structure. They are part of a new colonial state. They are really not truly independent state.

Inquirer: Can you elaborate on this?

Ahmose: Independence means you have your governor and your economy, which ensures that people are employed. But there is nothing of unity that will make them work together and alleviate the sufferings of the masses. The white structure will shut us off. If you have someone, a leader who comes to the forefront and says we should go a different direction, many will still support the statues quo. Blacks, from the time of immemorial, have been scattering all over the world. They are losing their identities as you mentioned about blacks here and in Jamaica.

Inquirer: Is there anyway to retrieve some aspects of their identities or put a stop at these roving around the world?

Ahmose: We can regain some of the culture. As a young girl growing up in Jamaica, I saw the need for a language among us. In my school in Jamaica, we kept asking why are we not learning African languages? They told us, “we don’t do that. I started working on that. If I have a way out, I will form a committee to aggressively advocate the acceptance of Swahili as a universal Black language.

Inquirer: Do you think other African countries will agree with that concept? Take Nigeria for example; there are over 250 tribes with their distinct languages, where are the possibilities that they will embrace another language over their own?

Ahmose: That is true. When I was in Jamaica, I had a pen pal in Kenya who I used to share that concept with but when I came to the United States, I met the Yorubas, Ibos, Sierra Leonians, Ghanaians with their different languages and started thinking of a different approach to the language question. Inquirer: What is the new concept? Ahmose: I think we should form developp alphabets and come out with a language like the English and others. I formed a language called Kiafrakaf. Language is important if we want to change the mentality of people to be independent and make money and be self sufficient like those in the rich nations. Language is important to our unification.

Inquirer: What about the economy and Black leaders who think of their pocket alone and care less about the welfare of the population?

Ahmose: All those are true because they haven’t got the mentality within them to liberate themselves from the shackles of oppression. You can only be liberated inwardly. Nobody can come and say Mr. Joseph I will give you $10. The only thing you are going to do with the money is to have a good time.We have the political control; we need to have the ability to use the technology to develop it. If I leave it to foreigners, we will never get anywhere. The emphasis is on us as a people. If you are here in America and don’t project our identity and include our tribal heritage, there won’t be anything to equalize us and make us have one concept and one ideology. You are coming to America and you don’t bring anything to work on, how are you going to make it? The Italians brought theirs. The polish brought theirs. The Chinese, the Koreans all brought theirs, where is yours? You have to bring yours and develop it together. Otherwise, we will just be struggling as economic rivals?

Inquirer: What message do you have for Blacks in the Diaspora?