Why I object to Homosexuality and Same-sex unions 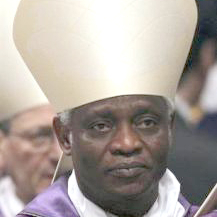 The Church of Nigeria is an Evangelical Church. It upholds the authority of scripture and is unreservedly committed to mission and evangelism that results in conversion of people to the Lord, church planting and the caring ministry. In this Church, we teach about the total depravity of man and his absolute need for salvation through faith in Jesus the Christ. For us, therefore, adherence to scripture is not only paramount, it is also non-negotiable. In matters of faith and practice, scripture provides sufficient warrant for what is considered right and what is judged to be wrong.

In recent times, we have been told that the issue of homosexuality is relative. We believe it is not a relative matter. In the context of our part of the Church and society, we see it as a behavior that is expressly forbidden and roundly condemned in scripture. For instance, Leviticus 18.22 commands: “Thou shalt not lie with mankind, as with womankind: it is abomination.” (See also Leviticus 20.13; Genesis 19.1-14, 13.13; Romans 1.26-28; cf. Leviticus 18.23.)

This is why it is such a crucial issue that it cannot be treated on relative terms, or accepted on the grounds of local pressure. Instead, it is identified in scripture for what it is — sin.

The point here is not of separating from sinners, with a holier-than-thou attitude, but objecting strongly to yielding to the permissive and satanic spirit, the worldly spirit of a materialistic, secularist and self-centered age, which seeks to mould everyone into its own tainted image.

Our argument is that, if homosexuals see themselves as deviants who have gone astray, the Christian spirit would plead for patience and prayers to make room for their repentance. When scripture says something is wrong and some people say that it is right, such people make God a liar. We argue that it is a blatant lie against Almighty God that homosexuality is their God-given urge and inclination. For us, it is better seen as an acquired aberration.

THE ISSUE is such an important one, such a defining one, with the potential of splitting the Communion, because it has become a chronic aberration, which is being defended and promoted in the Church of God. On the authority of the word of God, we see homosexuality as a rebellion against God, like that typified by Adam and Eve in Genesis 3. A rebellion cannot be relative.

Moreover, homosexuality is flagrant disobedience to God, which enables people to

pervert God’s ordained sexual expression with the opposite sex. In this way, homosexuals have missed the mark; they have shown themselves to be trespassers of God’s divine laws.

Protagonists of homosexuality try to elevate this aberration, beyond divine scrutiny, while church leaders, who are called to proclaim the undiluted word of God like the prophets of old, are unashamedly looking the other way.

The practice of homosexuality, in our understanding of scripture, is the enthronement of self-will and human weakness, and a rejection of God’s order and will. This cannot be treated with levity; otherwise the Church, and the God she preaches, will be badly deformed and diminished.

Homosexuality does violence to nature. As someone puts it: “It contradicts the very light and law of nature.” Romans 1.26-27 says it this way: “For this cause God gave them up unto vile affections: for even their women did change the natural use into that which is against nature: And likewise also the men, leaving the natural use of the woman, burned in their lust one toward another; men with men working that which is unseemly, and receiving in themselves that recompense of their error which was meet.”

THE ISSUE is such a defining one because two cannot go together except if they agree. To overlook this fundamental departure from scripture is not safe for faith or conscience; it means “walking in the counsel of the ungodly”. The consequence is to risk the displeasure of God.

What we are talking about is an attack on the Church by some whose aim is to discredit the gospel, pollute the Church, neutralize its power and pull it down. Christ has forewarned: “He that is not with me is against me; and he that gathereth not with me scattereth abroad” (Matthew 12.30).

If those who are promoting this energy-sapping and unnecessary controversy were to be a little more spiritually sensitive; if they were to walk closely with the Lord and accept the authority of his word as revealed in scripture, they would not need to be persuaded about what is at stake. The acceptance of homosexuality and lesbianism as normal is the triumph of disobedience; the enthronement of human pride over the will of God. This lifestyle is a terrible violation of the harmony of the eco-system of which mankind is a part. As we are rightly concerned by the depletion of the ozone layer, so should we be concerned by the practice of homosexuality.

God instituted marriage between man and woman, among other reasons, for procreation. To set aside this divine arrangement in preference to self-centered perversion is an assault on the sovereignty of God. Homosexuality is an abuse of a

With this tragic topic on the agenda of the Anglican Church worldwide, the Church has regrettably come to crossroads, but we hope that the Compass Rose will be able to give direction on the safest way home — to peace and communion. The majority of us still believe that communion is important, and it is cherished by us all. However, this is not at the expense of vital communion with God, and certainly not at the cost of shepherding more than 17 million Nigerian Anglicans into harm’s way by leading them into the wilderness of morally empty theologizing.

Homosexuality or lesbianism or bestiality is to us a form of slavery, and redemption from it is readily available through repentance and faith in the saving grace of our Lord, Jesus the Christ.

(The Most Rev’d Peter Akinola is the Archbishop and Primate of Church of Nigeria Anglican Communion).

Pastor with $12 m. in account ministers prosperity in Chicago