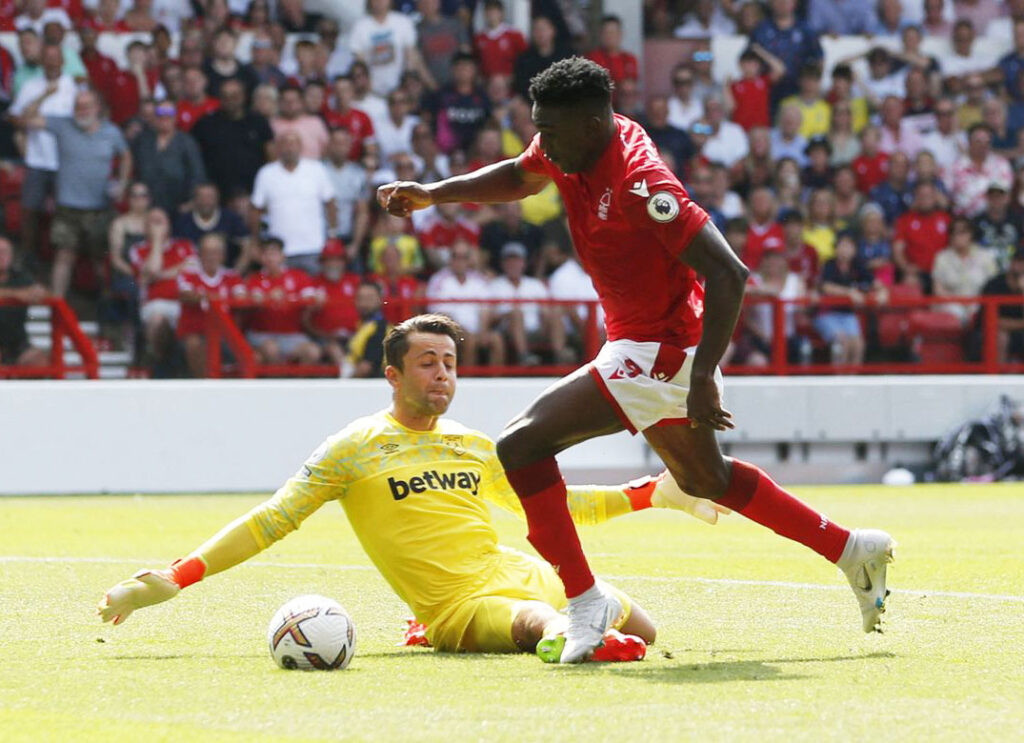 NOTTINGHAM, England, Aug 14 (Reuters) – A first-half goal from Taiwo Awoniyi was enough to earn Nottingham Forest a 1-0 win over West Ham United on Sunday, their first victory of the new Premier League season as the City Ground hosted top-flight soccer for the first time since 1999.

Awoniyi scored Forest’s first Premier League goal in 23 years in first half stoppage time and it proved to be the difference as both teams had goals disallowed by VAR and West Ham captain Declan Rice had a second-half penalty saved.

“I’m really happy about it because it took me a long journey to get back to the Premier League and I’m very, very proud of myself,” said Awoniyi, who was at Liverpool from 2015-21 but did not make a competitive appearance and was loaned out several times.

“It was a dream for me to score and for the team to win… I believe we will have a great season.”

Steve Cooper’s side had been outclassed by Newcastle United during their 2-0 defeat on the opening day but looked at home in the top flight against West Ham, who were also looking to bounce back from a 2-0 loss to champions Manchester City.

Spurred on by a boisterous home crowd, Forest started on the front foot and kept David Moyes’ West Ham at bay in a frantic first half before Awoniyi, making his home debut, bundled home Jesse Lingard’s miscued shot from Harry Toffolo’s cross.

Moments earlier, Said Benrahma had slotted past on-loan Forest goalkeeper Dean Henderson following a West Ham counter-attack but the goal was chalked off after Michail Antonio was adjudged to have fouled Orel Mangala in the build-up.

West Ham midfielder Pablo Fornals struck the crossbar seconds after the restart and the rebound fell to Tomas Soucek, whose header was clawed away by Henderson as the visitors made an electric start to the second half.

Their momentum was soon halted, however, when Forest forward Brennan Johnson – their top scorer last season with 19 goals in all competitions – beat goalkeeper Lukasz Fabianski with a dinked finish in the 54th minute before being ruled offside.

On the hour mark, West Ham winger Benrahma hit the woodwork from distance before Soucek’s shot was blocked by the slightly extended arm of Forest defender Scott McKenna, resulting in a penalty for the visitors after a VAR replay.

Rice stepped up to take the spot kick but his effort, dragged low to his left, was saved superbly by Henderson to preserve the hosts’ slender lead.

In the closing stages, Forest full back Neco Williams cleared Kurt Zouma’s header off the line as Cooper’s side saw out seven minutes of stoppage time to pick up their first points of the campaign.

“This place is a fortress. The fans have been bouncing all game and they deserve this one,” Henderson said.

“I know Dec’s favorite side (on penalties) as I’ve trained with him before… I stuck with what I knew and luckily he put it there.”

Reporting by Hritika Sharma in Hyderabad Editing by Christian Radnedge