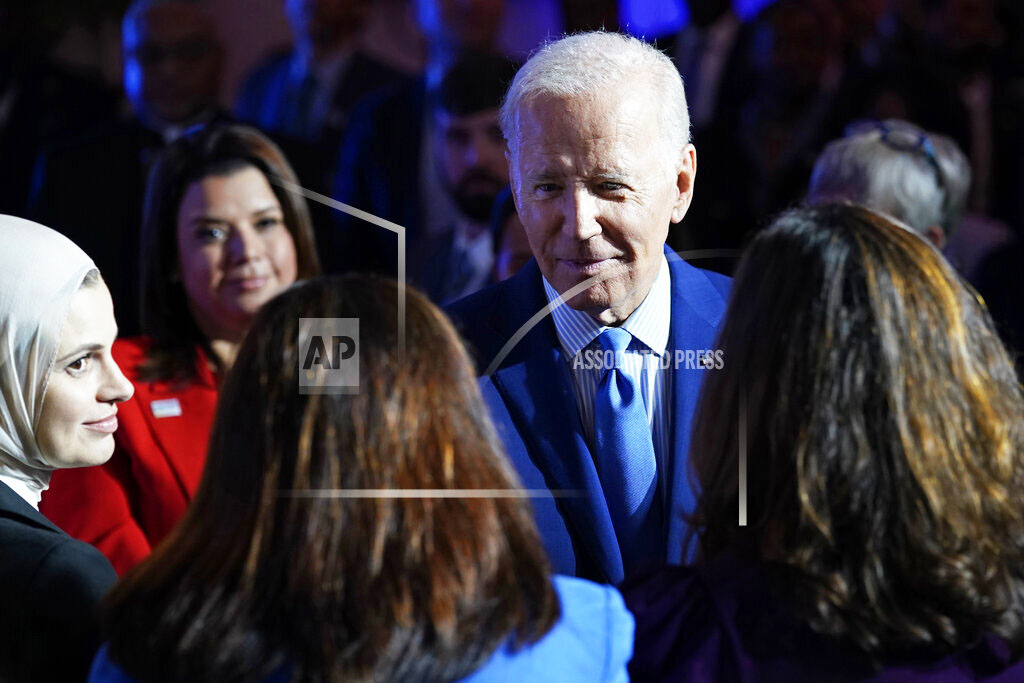 President Joe Biden greets people after speaking at the United We Stand Summit in the East Room of the White House in Washington, Thursday, Sept. 15, 2022. The summit is aimed at combating a spate of hate-fueled violence in the U.S., as he works to deliver on his campaign pledge to "heal the soul of the nation." (AP Photo/Susan Walsh)
Share
Facebook Twitter LinkedIn Pinterest Email

Biden, who rarely does interviews, spoke to CBS’ “60 Minutes” in a segment that aired Sunday. He said that when he heard about classified documents taken from the White House, he wondered how “anyone could be that irresponsible.”

Biden added: “And I thought, what data was in there that may compromise sources and methods?”

The president said he did not get a heads-up before the Trump estate was searched, and he has not asked for any specifics “because I don’t want to get myself in the middle of whether or not the Justice Department should move or not move on certain actions they could take.”

The FBI says it took about 11,000 documents, including roughly 100 with classification markings found in a storage room and an office, while serving a court-authorized search warrant at the home on Aug. 8. Weeks after the search, Trump lawyers asked a judge to appoint a special master to conduct an independent review of the records.

The warrant says federal agents were investigating potential violations of three different federal laws, including one that governs gathering, transmitting or losing defense information under the Espionage Act.

Biden told “60 Minutes” that when he heard about classified documents being taken from the White House, he wondered how “anyone could be that irresponsible.”

“And I thought what data was in there that may compromise sources and methods?”

In the wide-ranging interview, the president wouldn’t commit to running for reelection in 2024, though he’s said in the past that he planned to.

“My intention, as I said to begin with, is that I would run again,” he said. “But it’s just an intention. But is it a firm decision that I run again? That remains to be seen.”

Biden was asked about growing concerns that Russia’s efforts to seize Ukraine could inspire China’s leader Xi Jinping to attack Taiwan. The island has been recognized by the U.S. as part of China but has its own democratic government. Xi and Russian President Vladimir Putin met last week.

Biden again said the U.S. forces would respond “if in fact there was an unprecedented attack.”

White House officials later said the official U.S. policy had not changed, and would not say whether American forces would be called to defend Taiwan. Biden has made the claim before, but the statements come at an increasingly tense time for U.S.-China relations, particularly after House Speaker Nancy Pelosi’s trip there last month.

The president said the U.S. commitment to Ukraine was “ironclad” and would remain so “as long as it takes.” Ukrainian troops are engaged in a counteroffensive that has reclaimed towns and cities from Russian troops. But the toll the war has taken is vast, and fresh atrocities are being revealed, including torture chambers and mass graves. Since January 2021, the U.S. has given more than $13.5 billion in security assistance to Ukraine.

In the same hour, “60 Minutes” also aired an interview with Iranian President Ebrahim Raisi, who will be speaking to the U.N. General Assembly in New York this coming week. Raisi echoed standard Iranian lines about the status of currently stalled nuclear talks with world powers. He said the United States is not trustworthy and demanded guarantees that the U.S. would not withdraw from a deal as President Donald Trump did in 2018.

Raisi said he had no plans to meet with Biden on the sidelines of the U.N. event as it would serve no purpose, although he reiterated that Iran is willing to discuss prisoner exchanges with the United States. He also defended his country’s anti-Israel stance and said Tehran was committed to pursuing “justice” for the Trump administration’s assassination of a top Iranian military commander.