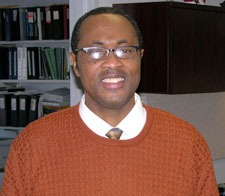 Oshuntokun, now late, beame a  professor at 35. “I became a professor before Professor Oshuntokun died,” an elated Ajayi was quoted as saying recently.

Born in Ado-Ekiti, in Ekiti State of Nigeria, Adesuyi joined the

pharmacy department last month as one of its pioneering lecturers. CSU recently got approval from the Illinois Board of Higher education to start the College of Pharmacy and its Doctor of Pharmacy program.

The school, according to a message posted on its website, received accreditation status last academic year from the Accreditation Council on Pharmacy Education (ACPE). The first class will graduate in 2012.

Until he relocated to U.S., he was a professor and Chair of Medicine

He is regarded as an asset to the pharmacy department because of his research interest in cardiovascular pharmacology and pathophysiology, thrombosis, and endocrine regulation of the endothelium. He has published four books including Diaspora Medicine (2001) and Immigration and Health (2008) and many peer- reviewed journal articles.

He worked briefly with the College of Health Sciences where another Nigerian-American and former professor at Obafemi Awolowo Dr. Joseph A.Balogun serves as dean. Dr. Balogun was last May, 15, 2008 honored with a Distinguished University Professor Award for transforming  the university from what they described as  “relative obscurity to national and international prominence. Another renowned epidemiologist, a Nigerian-American,  Dr. Williams Ebomoyi is also serving as chairman of the health studies department while Dr. Adedeji Adefuye, a former University of Illinois (UIC) assistant dean serves as the director of HIV/AIDS Research and Policy Institute.  Another Nigerian-American Dr. Justine K. Akujieze, a professor of physics is the Dean, College of Professional Studies.

Both Adedeji and Balogun received praise from the immediate past president of CSU, Dr. Elnora D. Daniels, for working “assiduously on the relationship between inmates and explosion of HIV/AIDS in African-American  community.

leaving college,” said Dr. Daniel who listed the pharmacy school and accreditation of several professional courses as part of his achievements as CSU president.