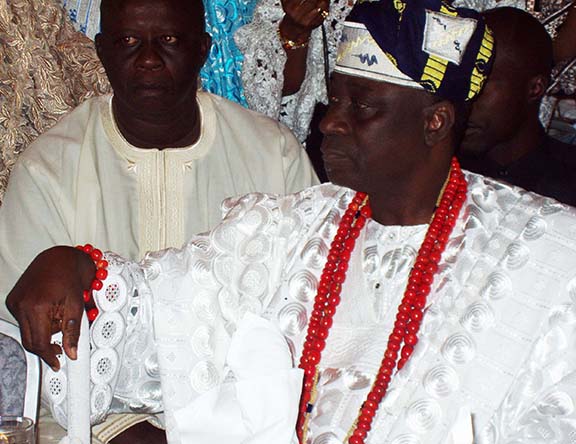 “We are here to solidify the relationship between Lagos and Chicago. Chicago is a sister city to Lagos and we are here to build on the existing relationship with the hope of turning Lagos into Chicago,” Nigeria’s monarch Oba Rilwan Akiolu of Lagos told The Chicago Inquirer on Monday.

In his first international outing as the Oba of Lagos, the monarch expressed satisfaction with the visit. “I met the mayor, city and Cook County officials, Lagosians and friends and Africans from all walks of lives,” the Oba said.

He appealed to the Cook County board President John Stroger, to make Lagos a sister city and help the commercial capital of Nigeria with medical equipment and facilities, commercial and educational materials to enable Lagos residents benefit from modern facilities available here. Governor Bola Tinubu, the chief executive of Lagos, he said, had put in place several programs that would turn around Nigeria’s former capital.

He listed tourism packages, construction of a new bridge to link Epe and Lagos mainland and mass transit transportation to ease road congestion. The Oba described Lagos as a cosmopolitan city of seven million residents out of which 80 percent are non-indigenes. All these have an effect on the infrastructure. Where you plan for 5 million, by the time you count the influx into Lagos, it goes to 9 million. It is really hectic,” the former police officer explained.

The king hinted that the rail transport system of former governor Lateef Jakande of Lagos discarded by the military in 1984 may be reintroduced to permanently ease road congestion in the sprawling city. “It is not too late. The khaki boys killed it in 1984. The cost would have been fully paid by now,” he said.

“The future of Nigeria is bright. Various programs are being carried out by the three tiers of government to guarantee full employment for all,” he said and advised Lagosians and other African immigrants to reach out to those they left behind at home.

He described his installation as the new Oba of Lagos as an act of God. I’m happy and relaxed on the throne. It is something I had prayed to be crowned for 35 years. There are many princes but the crown is only one,” he said. “Leadership is bestowed on individual as a blessing of God. It is a position of trust bearing in mind that you are accountable to the Almighty and Creator,” he said.

The former police officer advised immigrants here to be disciplined, law-abiding and stay away from criminal activities that could deny them the prosperity of the land stressing “I served in the Nigeria Police Force for 32 years and will never condone indiscipline in the palace. It will never happen in my time,” he emphasized. He invites other Lagos princes to join hands with him in turning around the city and ridding it of all challenges. “We all belong to the same family, whether you are from the Dosumu, Ologunkutere or Akiolu royal family. It is our collective responsibility to make Lagos great,” he said. Oba Akiolu was picked to succeed Oba Oyekan as the Lagos monarch by a unanimous decision of the entire king makers after the latter passed away at the age of 92. It was the first time the king makers will agree on one candidate. “I prayed to God to be crowned. I advise others to be patient and belief in God. They should also pray for the incumbent to succeed and have a longer reign. That was exactly what I did and God answered my prayer. They should not be a bootlicker,” he advised.

A long-time friend and confidant of the Oba Akiolu, Prince Ogunsanya had earlier described Kabiyesi as “forthright, honest and hardworking,” full of wisdom and a perfect gentleman, a thorough-bred Lagosian who wants the best for everybody around him.” “I’m happy and relaxed and looking forward to better days for Lagos and Nigeria.

The palace is a public property belonging to all Obas. At present I’m the custodian of the palace and it is the collective responsibility of every one of us to maintain it and make it decent and befitting palace,” the Oba said. The former Assistant Inspector General (AIG) called for true federation in Nigeria for the overall benefit of the country. “Let the states have a say in their God-given resources. We need more devolution of power to the state and local governments.

It will enable the local government to serve the interest of those that elected them instead of the present sharing of monthly allocation by the federal government,” he said. Married with 12 children, six of them are studying in England, the Oba envisioned that Nigeria would soon practise democracy under a true federation. ‘We will get their one day. We are a developing nation and we are in a process which will invariably get us to the promised land,” he explained.

The Oba promised to bring his wealth of experience and training to play in launching Lagos to an enviable pedestal. “We are faced with the prize of urbanization and social changes in life and Lagos is not an exception. With proper planning, things will be better,” he said. He thanked all that ensure his visit a huge success.

The king acknowledged the roles played by a true and worthy son of Lagos, Dr. Nurudeen Olowopopo in facilitating the meeting with the Cook County and City officials. Dr. Olowopopo turned 60 on September 19th and the birthday party was graced by dignitaries including Governor Bola Ahem Tinubu, Oba Akiolu, Nigerians in Chicago and city officials.