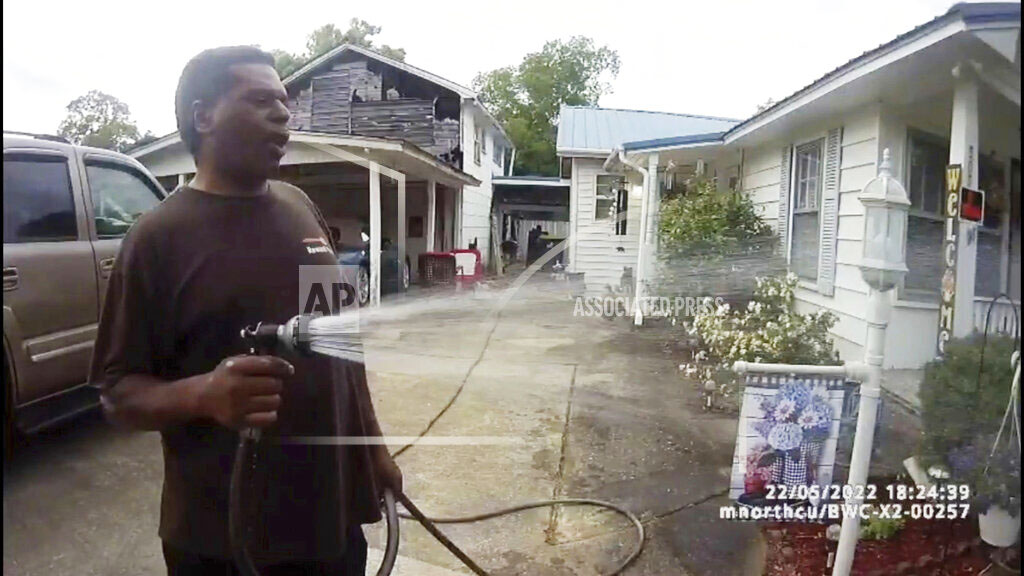 This image captured from bodycam video released by the Childersburg (Ala.) Police Department and provided by attorney Harry Daniels shows Michael Jennings, left, in custody in Childersburg, Ala., on Sunday, May 22, 2022. Jennings was helping out a friend by watering flowers when officers showed up and placed him under arrest within moments. (Childersburg Police Department via AP)
Share
Facebook Twitter LinkedIn Pinterest Email

BIRMINGHAM, Ala.  — A Black pastor who was arrested by white police officers while watering the flowers of a neighbor who was out of town filed a federal lawsuit alleging the ordeal violated his constitutional rights and caused lingering problems including emotional distress and anxiety.

Michael Jennings filed the lawsuit Friday night against three officers and the central Alabama town of Childersburg requesting a jury trial and seeking an unspecified amount of money.

Jennings’ lawyers held a news conference outside the Birmingham federal courthouse on Saturday to discuss the lawsuit, and the NAACP, the nation’s oldest civil rights organization, and other groups planned a rally afterward at a downtown park.

Jennings, 56, was arrested in May after a white neighbor called 911 and said a “younger Black male” and gold SUV were at a house while the owners — who are friends of Jennings and had asked him to watch their home — were away.

Jennings identified himself as “Pastor Jennings” but refused to provide identification to the officers, who arrested him on a charge of obstructing government operations after a 20-minute confrontation that included raised voices on both sides.

Filed in municipal court, the charge was dismissed within days at the request of the then-police chief. Jennings’ attorneys last month released police body camera video that was obtained following a records request to the city, located 55 miles (88 kilometers) southeast of Birmingham.

Benard Simelton, president of the Alabama branch of the NAACP, said the officers who arrested Jennings did “so many things” that weren’t in line with good community policing tactics.

“These poor judgment decisions reflect poorly on the type of training the Childersburg police officers receive … if they were acting in accordance within police guidelines,” Simelton said in a statement.

While Jennings could have filed a claim against the city seeking damages, attorney Harry Daniels said that wasn’t done because the arrest was well within the time frame allowed by law for a lawsuit.

Benedict XVI, reluctant pope who chose to retire, dies at 95

Pope on Christmas: Jesus was poor, so don’t be power-hungry