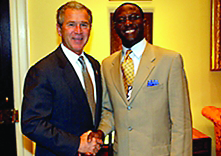 The wounds of the apartheid era appears to be coming out again going by the just concluded tour of Africa by President George Bush.

Bush spent 36-hours in the former apartheid enclave. He never requested to see Mandela. The action, some would interpret it as a revenge for the tongue-lashing Mandela gave Bush in the run-up to the US-led war against Iraq.

Mandela criticized Bush — and British Prime Minister Tony Blair — for their intention to ignore the United Nations Security Council and declare war against Iraq if it failed to disarm.

South African Deputy Foreign Minister Aziz Pahad said a meeting between Mandela and US President George W Bush had never been on the cards.

Mandela’s statements are his statements. It’s his view,” he responded to questions on whether the government was upset about Mandela’s renewed criticism of Bush.

Asked last week if he would be meeting Bush, Mandela asked why it was assumed that Bush wanted to meet him.

Zelda la Grange, Mandela’s spokeswoman, said at the weekend that Mandela would be out of the country at the time of the Bush visit.

She said that there had been no request to meet Mandela.

It is almost unprecedented for a head of state or foreign minister of a leading nation not to ask to see Mandela during a visit to the country – be it a working, official or state visit.

Sources close to Mandela said former freedom fighter has made peace with Blair by apologizing – without withdrawing his comments -in a telephone chat.

But Mandela’s irritation with Bush ran deeper, apparently because Bush had declined to accept a call from him.

The word in diplomatic circles is that White House national security adviser Condoleezza Rice decided not to put through his call.

As far as can be established the only other world leader who has refused to take Mandela’s call is Saddam Hussein, who feared doing so would disclose his whereabouts to would-be American assassins.

History will decide who has been damaged most by Bush’s decision not to see Mandela. Mandela antagonism of Bush and America, analyst said runs deeper than the Iraq war.

It dates back to the apartheid era which ANC leaders believed would have ended two decades earlier if America had supported their struggle.

Speaking in Johannesburg last year during the three-day International Women’s Forum held in Africa for the first time, Bush criticism dominated Mandela address to the delegate.

He encouraged women throughout the world to be “bold with its leadership and condemn the looming war America is preparing for”.