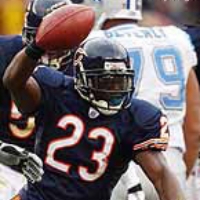 The Chicago Bears are headed for victory if their level of preparation and determination  at Olivet Nazarine University (ONU) in Bourbonnais, a far Southwest Chicago suburb is to be considered.

“We are ready. Things have changed from last year when we struggled a little bit.  We are coming out with a clean slate. We are working hard towards achieving a common goal,” said Bears Cornerback Jerry Azumah enthusiastically.

The five-year veteran, born of Ghanaian parents continued after a vigorous morning training session at ONU, “The common goal is to win every game possible and move forward. We’ve been preparing ourselves since the end of last

season and we should be ready to battle this week.”

The players are excited about returning to a renovated Soldier Field Stadium where Azumah said the Chicago fans would spur them to victory through their unflinching support.

“It is going to be spectacular this season. We will be back at the new stadium. We will be close to home. Our fans will be supporting us. Even though we have a tough schedule, we are ready and prepared to play hard against each of our opponents day-in-day-out and every day,” he affirmed.

“It is always good to be in the midst of those that love you and wish you to succeed,” he said adding that the team is anxious and to take each team one at a time.

Azumah is aware of the emphasis on the Green Bay Packers but said his team’s first objective is to beat the San Francisco Giants and later Minnesota before the Packers.

“We want to go and win every game and not just the Packers,” he said.

He encouraged first-generation African immigrants to take interest in football instead of soccer and other sports they are used to playing in the Black continent.

His parents emigrated to the United States more than 30 years ago and settled in Oklahoma. His sister Bridget lives in Chicago and the two children moved with their parents to Boston Massachusetts where Azumah attended high school in Worcester and moved to New Hampshire University where he was drafted in 1999.

Azumah took interest in football instead of soccer at an early stage, he said. “God blessed me with a lot of athletic abilities and here I am in the NFL.

“My goal now is to be the best. Every time I get on the field, I want to compete. I mean doing the best I possibly can to excel and I thank God for giving me the skills. I have the confidence because without it you can’t compete in the NFL,” he said.

He advised African immigrants to develop an interest in football, look beyond soccer and build the needed confidence, citing that football is a little bit different from soccer.

“They need to develop their interest and give their best in football just like they do in soccer. Not everybody that plays soccer makes it to the professional level. You’ve got to work hard and your hard work will pay off now or in the near future,’ he said.

Humble and fast on the pitch, the five-year NFL veteran is ready to surpass the achievements of retired African football players like Nigeria’s Christian Okoye.