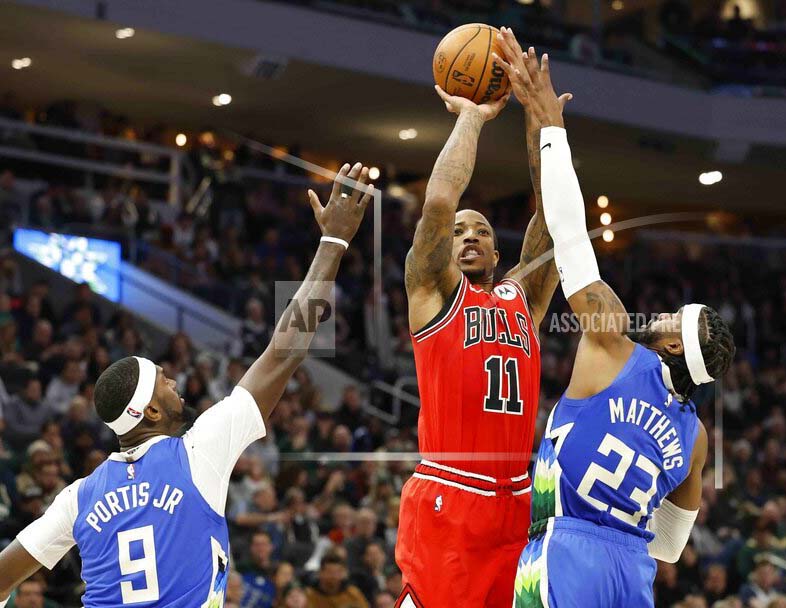 MILWAUKEE  — DeMar DeRozan had 36 points and eight assists, and the Chicago Bulls beat the Milwaukee Bucks 118-113 on Wednesday night.

Chicago began the week with a 6-10 record but has now beaten the NBA’s top two teams. The Bulls ended Boston’s nine-game winning streak on Monday.

Giannis Antetokounmpo had 36 points, 11 rebounds and seven assists for the Bucks, who lost for just the second time in 11 home games this season. Brook Lopez scored 20 points and Jrue Holiday had 14 points and 11 assists.

Milwaukee led 109-106 before White made a tying 3-pointer with 1:15 left. After Antetokounmpo was called for a charge, White took a pass from DeRozan and buried another 3 to put the Bulls ahead to stay. The Bucks turned over the ball on the ensuing possession and DeRozan found Vucevic, who swished a corner 3.

The Bucks had won 17 of their previous 19 games, including playoffs, over their Central Division rivals.

Antetokounmpo was limited to eight points on 4-of-11 shooting in the first half. He scored 11 points in the third quarter, but the Bulls held a seven-point advantage heading to the fourth.

The Bulls built a 10-point fourth-quarter lead before the Bucks battled back to tie it midway through the period.

Milwaukee led by as much as 12 in the second quarter before Chicago rallied. Holiday’s buzzer-beating jumper gave the Bucks a 62-61 halftime edge.

Bulls: Guard Goran Dragic had an MRI and sat out with a left cervical stinger that he sustained in Monday’s game. The injury is causing tingling and numbness in Dragic’s hand, coach Billy Donovan said. … LaVine received a flagrant-1 foul for kicking George Hill. … Donovan was whistled for a technical foul while arguing during a timeout.