Across the US, a return to democratic order. Will it last? 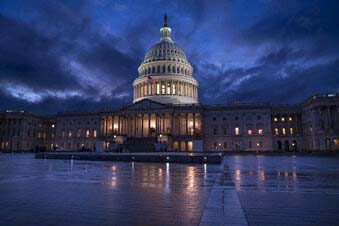 FILE - The Capitol is seen in Washington, Nov. 11, 2022. The post-election narrative has been focused on each party’s electoral fate: Republicans were disappointed that a red wave did not materialize, while Democrats braced for the likelihood of a House Republican takeover. (AP Photo/J. Scott Applewhite, File)
Share
Facebook Twitter LinkedIn Pinterest Email

WASHINGTON — There was no violence. Many candidates who denied the legitimacy of previous elections lost and quietly conceded. And few listened when former President Donald Trumptried to stoke baseless allegations of electoral fraud.

For a moment, at least, there’s a sense of normalcy in the U.S. The extremism that has consumed political discourse for much of the last two years has been replaced by something resembling traditional democratic order.

The post-election narrative was instead focused on each party’s electoral fate: Republicans were disappointed that sweeping victories didn’t materialize, while relieved Democrats braced for the possibility of a slim House GOP majority. At least for now, the serious threats that loomed over democracy heading into Election Day — domestic extremist violence, voter intimidation and Republican refusal to respect election outcomes — did not materialize in any pervasive way.

“What we saw was the strength and resilience of American democracy,” President Joe Biden said Monday at the Group of 20 summit in Indonesia, even as the White House acknowledges that Democrats might lose one chamber of Congress.

Yet the “crazy” that consumed Sununu’s party this fall still looms.

Even as many GOP leaders blame Trump for elevating weak and extreme candidates who struggled, the former president sought to undermine the midterm results from his low-profile social media platform. Trump posted no fewer than 20 messages since Tuesday afternoon raising the false prospect of electoral fraud in the 2022 election, increasingly focusing on Nevada and Arizona as vote counting there continued into the weekend.

His expected announcement on Tuesday of a third presidential campaign could give Trump another high-profile platform to advance lies about the election.

Of the high-profile candidates on the 2022 ballot, only Arizona’s Republican candidate for governor, Kari Lake, has been aggressive in promoting Trump’s unfounded concerns about the extended vote-counting process, which is typical in some states. Lake is locked in a tight race against Democrat Katie Hobbs that hasn’t been called.

“There isn’t this kind of concern like we had in 2020,” Ellis said on her podcast. “We can’t just say, ‘Oh, my gosh, everything was stolen.’ I mean, that’s ridiculous for this election.”

A leading progressive, Vermont Sen. Bernie Sanders, who has raised concerns about far-right threats to democracy since before his own 2020 presidential bid, suggested that the GOP has begun to act more rationally.

“I think that a number of Republicans now understand that Trump’s desire to undermine American democracy is not only wrong, but it is bad politics,” Sanders told the AP. “For all of those people who want to maintain the lies that Trump actually won in 2020, Tuesday was a bad day for them and a good day for the rest of the American people.”

Indeed, across the country, so-called election deniers lost some of the nation’s most important races.

Just one of 14 self-described “America First” secretary of state candidates, Indiana’s Diego Morales, won his race. The group of would-be chief election officials, which included candidates in swing states Arizona, Michigan and Nevada, was defined by Trump’s baseless claims that the 2020 election was stolen. Candidates who embraced such beliefs also lost races for governor in the Midwestern battlegrounds of Michigan, Minnesota and Wisconsin and in the Northeastern battleground of Pennsylvania.

Republicans who denied the legitimacy of the last election did prevail in Senate contests in North Carolina and Ohio. In Georgia, Republican Brian Kemp won reelection outright after fighting Trump’s conspiracy theories, but Senate candidate Herschel Walker, who has promoted lies about the last election, proceeded to a runoff election in December.

Before Election Day, NAACP President Derrick Johnson said he was “extremely concerned” that Black people would be disenfranchised by voter intimidation or other voter suppression tactics — especially as hundreds of pro-Trump activists signed up to serve as GOP election watchers across the country.

U.S. intelligence agencies issued a bulletin less than two weeks before the election warning of a heightened threat of domestic violent extremism that might target elected officials, election workers or voting places.

But days after polls closed, Johnson said the voting process largely went well. He noted, however, that it’s impossible to know whether the threat of intimidation or violence may have had a “chilling effect” on voter participation.

“It was frustrating that we have to operate in our democracy from a fear posture,” Johnson said. “We should be making it easier to vote.”

Meanwhile, world leaders noted the relatively smooth election in discussions with Biden during a weekend summit in southeast Asia. National security adviser Jake Sullivan said the outcome established “a strong position for him on the international stage.”

“I would say one theme that emerged over the course of the two days was the theme about the strength of American democracy and what this election said about American democracy,” Sullivan told reporters aboard Air Force One. “So, the president feels very good about — obviously, about the results.”

On Election Day, Trump tried and failed to sow disorder in multiple states — especially in regions with large minority populations.

Trump posted a message on social media Tuesday afternoon falsely claiming that voters were being refused the right to vote in Detroit. “Protest, Protest, Protest!” the former president wrote.

The message inspired no protests or even visible tension outside the Detroit convention center where votes were being counted. Two years earlier, scores of Trump supporters screamed and beat on the glass during the tabulation process.

At Milwaukee’s central count facility, several election observers heckled election commission members as roughly 250 workers tabulated the city’s absentee ballots Tuesday evening. Republican Commissioner Doug Haag, who stood witness as the flash drives with vote totals were sealed in envelopes, was among those who scolded the hecklers. They quieted down after receiving a final warning and were allowed to stay for the remainder of the process.

In Arizona’s pivotal Maricopa County, there were calls early on from far-right groups, including some known to attract Proud Boys, Oath Keepers and other extremists, for protests in front of the building where the ballots were being counted to demand a hand count of the vote. Police responded with a heavy presence on Election Day, bringing in mounted officers and helicopters. But not even a handful of protesters showed up. Two years earlier, a large group of armed protesters gathered outside the same tabulation center.

And in Nevada, local officials were prepared for disorder, but bad weather more than voter intimidation marked Election Day.

In populous Clark County, a Democratic stronghold, one man walked into a polling place and raised his voice at poll workers, saying the machines were rigged, according to the Clark County School District Police Department. Poll workers told him to quiet down before he walked outside, where he tried to pull down the “vote here” sign.

In the Reno, Nevada, area, where voters braved snow and ice on Election Day, Washoe County interim registrar Jamie Rodriguez said there was only one case of voter intimidation. Two men threatened poll workers and were “aggressive” toward voters, before a poll manager escorted them out. The Washoe County Sheriff’s Office said it was investigating.

“It was a lot of comments about them not being patriots, not doing the right thing,” Rodriguez said.

Why the British public is not choosing its leader