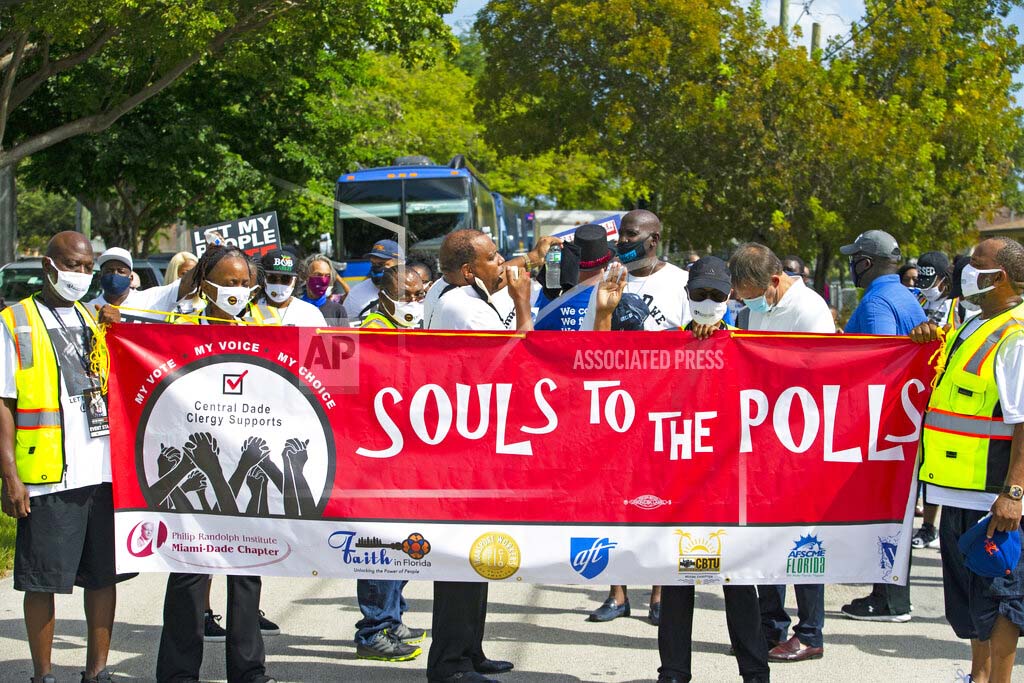 FILE - Pastor Carl Johnson from the 93rd Street Community Baptist Church prays with a large group of people before the march during the Souls to the Polls on the last day of early voting as part of one of many events prior to the general elections outside the African Heritage Cultural Arts Center on Sunday, Nov. 1, 2020, in Miami. Black church leaders in Georgia are organizing rallies to try to get their congregants to vote as part of a longstanding tradition known as “souls to the polls.” The effort is taking on even greater meaning this year after state lawmakers nearly did away with Sunday voting.(David Santiago/Miami Herald via AP)
Share
Facebook Twitter LinkedIn Pinterest Email

by Sudhin Thanawala and Gary Fields

ATLANTA  — Black church leaders in Georgia organized rallies Sunday in a push to get their congregants to vote — a longstanding tradition known as “souls to the polls” that is taking on greater meaning this year amid new obstacles to casting a ballot in the midterm elections.

State lawmakers nearly did away with Sunday voting under a bill signed into law last year. The Republican-sponsored legislation followed former President Donald Trump’s false claims that voter fraud cost him reelection in 2020.

Though lawmakers backed off the Sunday voting ban, the bill shortened the time to request a mail ballot, rolled back the COVID-19 pandemic-driven expansion of ballot drop boxes, reduced early voting before runoff elections and prohibited groups from handing out food and water to voters in line.

Republicans said Georgia’s new law was necessary to restore confidence in the state’s election system. Civil rights advocates saw it as an attack on Black voters, who helped Democrats win the presidential contest in Georgia in 2020 for the first time since 1992 and later take the state’s two U.S. Senate seats. They are pushing back by redoubling efforts to turn out Black voters.

Sunday’s scheduled “souls to the polls” events include a caravan organized by church leaders and civil rights groups to take congregants from Rainbow Park Baptist Church in the Atlanta area to a mall where they can vote early. U.S. Sen. Raphael Warnock, the pastor of Ebenezer Baptist Church in Atlanta, also planned to hold a rally to get church members to vote on the last Sunday of the early voting period.

“Souls to the polls” reflects the Black church’s central role in the fight for justice and freedom in the U.S., said W. Franklyn Richardson, chairman of the board of trustees of the Conference of National Black Churches.

Richardson said efforts like it are particularly critical this election cycle.

“It’s the cumulative accomplishment of our people that is being challenged and threatened that makes this such an urgent election,” he said.

The idea for “souls to the polls” goes back to the civil rights movement. The Rev. George Lee, a Black Mississippi entrepreneur, was assassinated by white supremacists in 1955 after he helped nearly 100 Black residents register to vote in the town of Belzoni.

It reflects a larger effort in the Black community to leverage the church for voting rights, said Dartmouth history professor Matthew Delmont.

In addition to motivating potential voters, pastors provide the “logistical support to get people to go directly from church service to go to vote,” he said.